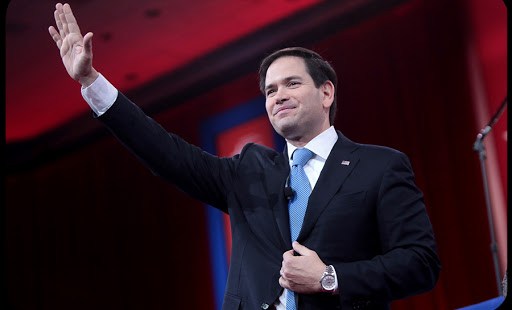 How big a role will faith play in his campaign?

Senator Marco Rubio of Florida has told political donors that he is running for president, according to The Washington Post:

Sen. Marco Rubio (R-Fla.), the son of Cuban immigrants whose rapid political ascent was nearly blocked five years ago by national Republican leaders, told supporters on a Monday call that he is running for president, according to two people familiar with his plans.

The Florida senator will officially launch his campaign for president later in the day in his hometown of Miami.

Rubio will make the announcement in front of the city’s Freedom Tower, an iconic, Ellis Island-like landmark where the federal government once processed Cuban immigrants fleeing the Castro regime. The downtown site holds great personal importance for Rubio, his family and the city’s influential  Cuban-American community.

Hours before his official launch, Rubio supporters were meeting at a downtown Marriott hotel a few blocks north of the tower, sporting name tags emblazoned with "Marco Rubio" that stated their name and hometown. Attendees with tags that identified them as hailing from California, Florida, New York and elsewhere were seen milling about the lobby and outside a ballroom on the second floor.

Rubio is four years into his first term as a senator. Rubio won his race in 2010 by appealing to fiscal conservatives or tea-party supporters, cultural conservatives, and Hispanics. The mixture has made him one of the Republican Party’s top political prospects, according to Harry Enten of FiveThirtyEight.com:

In part because he did so well with Hispanics, Rubio vastly over-performed most other Republican senatorial candidates in 2010, as well as those who ran in 2014.1 Rubio won his race by 11 percentage points more than you would have expected controlling for the past presidential vote of the state and incumbency.

Only nine of 72 Republican senatorial candidates in 2010 or 2014 performed better against expectations than Rubio. That’s a stronger claim to electability than Walker has made in Wisconsin (and Walker’s claim ispretty strong).


Rubio was baptized as a Catholic, turned to Mormonism as a youth, married a Southern Baptist, and has gone to Baptist and Catholic services. As reporter Lauren Markoe of Religion News Service notes, in his autobiography Rubio explained his devotion to Catholicism this way:

“I craved, literally, the Most Blessed Sacrament, Holy Communion, the sacramental point of contact between the Catholic and the liturgy of heaven,” he wrote. “I wondered why there couldn’t be a church that offered both a powerful, contemporary gospel message and the actual body and blood of Jesus.” Starting in late 2004, he began to delve deeper into his Roman Catholic roots, reading the whole catechism, and concluding that “every sacrament, every symbol and tradition of the Catholic faith is intended to convey, above everything else, the revelation that God yearns, too, for a relationship with you.”