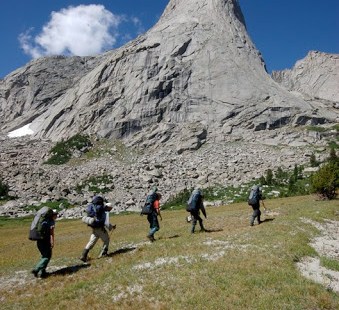 They ride horses, they study Aquinas, they speak Latin to one another as they take walks in the mountains. But there’s one thing they don’t do at Wyoming Catholic College. They don’t take any federal funding.

According to a profile in Sunday’s New York Times, that’s leading to an "insurrection" among students at what they call a "tiny redoubt of cowboy-style Catholicism."


Citing concerns about federal rules on birth control and same-sex marriage, the school decided this winter to join a handful of other religious colleges in refusing to participate in the federal student-aid programs that help about two-thirds of students afford college. For students here, the decision means no federal loans, work-study money or grants to finance their annual $28,000 tuition, which includes housing in gender-segregated dorms and three meals in the school’s lone dining hall.

If you do not take the money, college leaders argue, the government cannot tell you what to do.

“It allows us to practice our Catholic faith without qualifying it,” said Kevin Roberts, the college’s president.

In a statement issued to Aleteia, Roberts commented, "We are pleased to see the New York Times’ interest in Wyoming Catholic College, as our story is an important one for people of faith to know. Though I’m not quite sure what the reporter intended by using the word ‘insurrection,’ I can report that if there is any ‘insurrection,’ that all of us at WCC are on the same side: believing that government overreach has gone too far. In the 21st century, I suppose it’s fitting that a group of ‘cowboy Catholics’ would be leading that charge in the culture war."

The article noted that a few other colleges also decline federal dollars, including Christendom in Virginia, Hillsdale in Michigan and New St. Andrews in Idaho. At Belmont Abbey College in North Carolina, officials say they are increasingly concerned about one day being required to provide benefits to same-sex spouses of employees and are looking at the financial costs of withdrawing from student-aid programs. The college president, William K. Thierfelder, said the college had determined that it would need a $375 million endowment to cover the loans and grants its 1,550 students would lose. Their current endowment is $10 million.

At Wyoming Catholic, the Times reported, "about 80 percent of the students receive some kind of financial aid, so the school figured it would lose $650,000 annually in loans and $250,000 in Pell grants that students would have used to pay their tuition."


School officials talked to students and parents about the additional financial burdens of getting private loans at higher rates, and asked whether it would be worth it to turn their backs on a revenue source accepted by an overwhelming majority of religious and secular schools. The overwhelming response, the officials said, was “yes.”


Participating in loan programs would have freed up more money for faculty salaries or expanding the nascent campus. For students, federal loans tend to be easier to defer after college, and some do not accrue interest while students are still studying. …

U
ltimately, the board said accepting the money would have been a Faustian bargain that could compromise the school’s core beliefs and mission.

“My concern was about the overreach of this administration,” said Richard W. St. Pierre, a board member, who brought up the Hobby Lobby case. “We may find ourselves in a similar position if you take federal money and don’t comply with an executive order.”

The Cardinal Newman Society has said that WCC is "perfect for nature and outdoor enthusiasts as well as those who want to stretch themselves intellectually in ways they never dreamed possible."