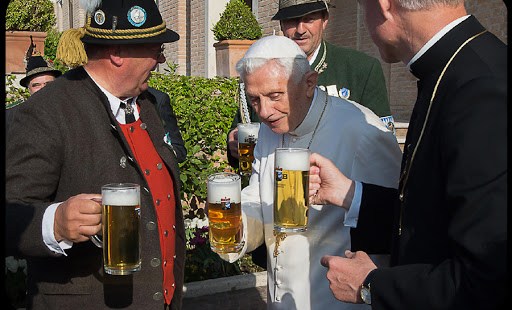 VATICAN CITY — Pope Emeritus Benedict XVI Thursday celebrated his 88th birthday under a sunny Roman sky with a pint of beer and a joyous gathering with family and friends.

The Vatican’s Osservatore Romano Thursday released photos of the German Pope accompanied by his brother, Monsignor Georg Ratzinger, and his longtime private secretary Archbishop Georg Gänswein, raising a toast with a group of Bavarians dressed in traditional garb outside his home in the Vatican Gardens.

In an interview with Mediaset television this week, the personal secretary of the pope emeritus said that, as the evening of life draws on, Benedict is preparing himself to meet the Lord.

Pope Francis offered Holy Mass for Benedict on Thursday morning, expressing his sincere hope that God “sustain him and give him much joy and happiness.”

Pope Benedict XVI became the first pope in 600 years to renounce the papacy, saying he no longer had the strength of body or spirit to carry on.

Archbishop Gänswein recently told the Italian newspaper La Repubblica that he tried to persuade him to stay, but that the Benedict was firm and serene in his decision.

These days, Benedict spends his time praying, reading, keeping up with his correspondences, and playing the piano.

Asked why the Pope emeritus chose to live at Mater Ecclesiae — the former cloistered convent nestled in the Vatican Gardens —  Archbishop Gänswein said that Benedict told him: “Upon reflection, I understood that Mater Ecclesiae would be the ideal place because it’s somewhat secluded, but at the same time it guarantees the freedom necessary to live a peaceful and hidden life.”