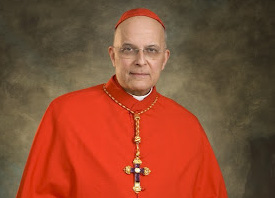 Cardinal Francis E. George, the long-time leader of the Archdiocese of Chicago, died Friday at age 78 after a long battle with cancer.

"A man of peace, tenacity and courage has been called home to the Lord. Our beloved Cardinal George passed away today at 10:45 a.m. at the Residence," said Chicago Archbishop Blase Cupich, Cardinal George’s successor, in a statement.

John L. Allen, writing at Crux Friday, noted, "George’s abiding passion was the relationship between faith and culture, and especially the urgency of a ‘New Evangelization.’"

Cardinal George liked to tell the story of when he and the bishops of his province visited Pope John Paul II on an ad limina visit one year. The cardinal placed a large dossier on the Pope’s desk, a report of activities in the archdiocese and surrounding dioceses over the past five years, and the Pope brushed it aside.

John Paul wanted to know just one thing, Cardianl George related: "What are you doing to change the culture?"

Another widely-repeated quotation from the Chicago prelate reflected his beliefs on the erosion of religious freedom in American society. "I expect to die in bed, my successor will die in prison and his successor will die a martyr in the public square."

But that quote has often left off a more hopeful vision of what will come after that, according to George: "His successor will pick up the shards of a ruined society and slowly help rebuild civilization, as the church has done so often in human history."

Archbishop Cupich, in his statement, pictured Cardinal George as a "man of great courage who overcame many obstacles to become a priest."

"When he joined the priesthood he did not seek a comfortable position, instead he joined a missionary order, the Oblates of Mary Immaculate, and served the people of God in challenging circumstances – in Africa, Asia and all around the world," he said. "A proud Chicagoan, he became a leader of his order and again traveled far from home, not letting his physical limitations moderate his zeal for bringing the promise of Christ’s love where it was needed most."

Born January 16, 1937, Francis Eugene George suffered a five-month bout with polio at age 13 which left him with permanent damage to his legs. After attending St. Pascal Grade School on Chicago’s northwest side and St. Henry Preparatory Seminary in Belleville, Illinois, he entered the Missionary Oblates of Mary Immaculate on August 14, 1957.

From 1973 until 1974 he was Provincial Superior of the Midwestern Province for the Oblates, based in St. Paul, Minnesota. He was then elected Vicar General of the Oblates and served in Rome from 1974 until 1986.

He returned to the United States and became coordinator of the Circle of Fellows for the Cambridge Center for the Study of Faith and Culture in Cambridge, Massachusetts from 1987 until 1990. During that time, he obtained a Doctorate of Sacred Theology in ecclesiology from the Pontifical Urban University, Rome, Italy, in 1988.

In 2010, Pope Benedict XVI appointed Cardinal George to the Pontifical Council for the Study of the Organizational and Economic Problems of the Holy See.

He served as the Chancellor of the Catholic Church Extension Society and the University of St. Mary of the Lake in Mundelein.

As Archbishop of Chicago, he issued two pastoral letters: on evangelization, “Becoming an Evangelizing People,” (November 21, 1997) and on racism, “Dwell in My Love” (April 4, 2001). His book, The Difference God Makes: A Catholic Vision of Faith, Communion, and Culture, was published in October 2009, by The Crossroad Publishing Company. It is a collection of essays exploring our relationship with God, the responsibility of communion and the transformation of culture.
His most recent book, God in Action: How Faith in God Can Address the Challenges of the World, was published in May 2011, by Doubleday Religion. In this collection of essays, he reflected on the significance of religious faith in the public sphere and underscores the unique contributions of religion to the common good.


Cardinal George was a respected leader among the bishops of the United States. When, for example, the Church struggled with the grave sin of clerical sexual abuse, he stood strong among his fellow bishops and insisted that zero tolerance was the only course consistent with our beliefs.

He served the Church universal as a Cardinal and offered his counsel and support to three Popes and their collaborators in the Roman congregations. In this way, he contributed to the governance of the Church worldwide.

Here in Chicago, the cardinal visited every corner of the Archdiocese, talking with the faithful and bringing kindness to every interaction. He pursued an overfull schedule — always choosing the church over his own comfort and the people over his own needs. Most recently, we saw his bravery first hand as he faced the increasing challenges brought about by cancer.