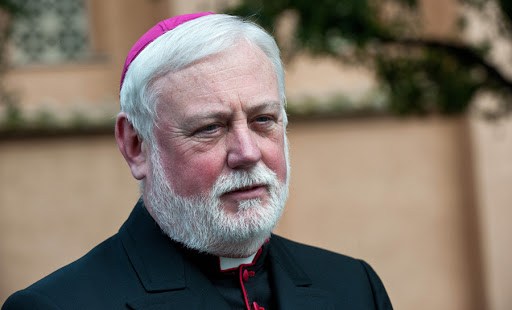 Go to the root of the problem, Archbishop Gallagher urges

A high-ranking Vatican official said that the international community should do more to counter the Islamic State’s persecution of Christians.

That "more" could include the use of "proportionate force" but also should include a greater effort to find diplomatic solutions and foster "peace and development" in the Middle East, said Archbishop Paul Richard Gallagher, Secretary for Relations with States, the number two official in the Vatican’s Secretariat of State.

"The international community cannot remain passive or indifferent to this humanitarian tragedy," Archbishop Gallagher said in an interview with Italian magazine Avvenire. "Faced with the challenges that arise, it must go to the root of the problems and seek to foster a future of peace and development for the region, focusing on the good of the person and the common good, without thinking about the particular interests or petty economic motives."

He said the military option should not be primary but that parties should "lay down their arms and dialogue and deepen our understanding of the root causes of the conflicts."

He acknowledged that Pope Francis has said that "it is permissible to stop the unjust aggressor, but always in compliance with international law." He noted that new forms of terrorism are "transnational," so aggression must be stopped through "multilateral action and the proportionate use of force."


It is the responsibility of the international community to reflect on the best means to stop any aggression and prevent the perpetration of new and even more serious injustices. In the specific case of violations and abuses committed by the so-called “Islamic State," it seems appropriate that the nations in the region be directly involved, along with the rest of the international community, in actions to be undertaken with the understanding that it is not a matter of protecting one or another religious community, or one or the other ethnic group, but rather people who are part of one human family and whose fundamental rights are being systematically violated.

He added that not only has diplomacy not proven useless, but the international community has not put into play "all of the tools and the will to dialogue and stop the violence."

Archbishop Gallagher had a special word for Muslim religious leaders, who "are expected to play a vital role in the fight against fundamentalism, promote interreligious and intercultural dialogue and education for mutual understanding.


Muslim leaders have an important responsibility in disavowing and condemn unequivocally the claims of the so-called "Islamic State" and atrocities committed against people solely because of their religious affiliation. There have been expressions of solidarity by some Muslim leaders and
Muslim politicians, who have condemned the actions of the IS and shown sympathy and solidarity with Christians and other groups.