Making Faith the Focus of Quinceañeras 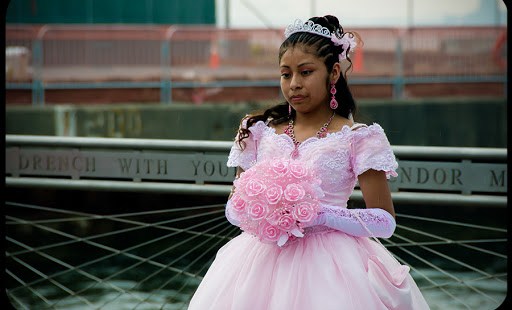 “Abandon the notion that girls become women at age 15,” said Father Alexander Díaz at a recent diocesan retreat for Hispanic girls. “[That milestone birthday] is the first step toward womanhood, but 15-year-old girls are still girls.”
Father Díaz, who serves as parochial vicar at Holy Family Church in Dale City, was addressing a room full of parents and their 14-year-old daughters at a diocesan retreat Feb. 21. The retreat is a new effort meant to prepare parents and girls for quinceañeras, the predominantly Mexican and Central American equivalent of a Sweet 16.

Quinces, as they’re known for short, originated in the New World during the Spanish Colonial era as a coming of age ceremony. Back then, once a girl turned 15, she received a priest’s blessing to either marry or enter the convent, thus becoming a woman in the eyes of society. Today, quince blessings are more likely to be followed by parties than betrothals. Some parties are as lavish as weddings, with catered food, live mariachi music, professional photographers and other luxuries. According to Father Díaz, the U.S. minimum average cost for a quince is $10,000 but can be upward of $25,000.


“Parents are spending what they don’t have,” he said. “They go into debt; they put the party on a credit card. They don’t want to break their girls’ hearts. But how many of them are thinking about college? What lesson is that for girls? I’m not against a party, but do it properly.”

Organized by Karla Aleman, an administrative assistant for the Spanish Apostolate, Arlington’s quince retreats take place on select Saturdays at the diocesan center. The program, which is divided into four parts, was designed to remind parents and girls of the milestone’s spiritual aspect.

The first part introduces the origin of the quinceañera and how the celebrations have evolved over time. The second part discusses quinces in terms of vocations — discerning God’s will and planning for the future. The third part focuses on the Christian aspect of quinces and what it means to be a Catholic woman. The fourth part discusses quince etiquette in a church setting. Girls are expected to participate through discussion and light journaling. At the end of the retreat, the girls receive a certificate of completion and a fresh rose.

Throughout the morning, Father Díaz emphasized the importance of education and hard work for any girl. He told parents to treat their daughters the same as their sons, and to be open-minded about their daughters’ career goals. Families should prioritize college and Christian values over ostentatious quinces.

Father Díaz said, “I don’t know if I’m standing among the first female president, a future Supreme Court justice, the person who will discover the cure for cancer or a new planet in the universe. But I don’t ask that you become presidents. I ask that you reach your full potential.”

When Father Díaz asked the girls about their dream jobs, their answers ranged from doctor to astronomer to FBI agent to animator. He encouraged them to focus on those dreams, while still making time for fun. That fun may include healthy outlets like sports or dancing, but not drugs, premarital sex or other sinful activities that “break your friendship with God.”
He warned parents against serving alcohol to minors at quinces, putting their daughters in revealing dresses and hiring indiscreet photographers who interrupt the Mass. He also asked families to respect the Eucharist, observe the sacraments and remember that a quince is about their daughters’ blessing and vocation.

Christine Stoddard is a staff writer at the Arlington Catholic Herald where this article was originally published.  It is reprinted here with permission. See more of her writing at here.