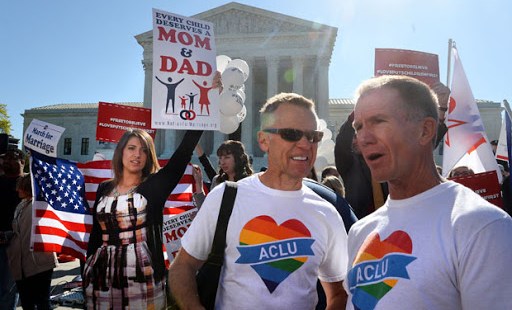 The Supreme Court heard arguments about the legality of same-sex marriage bans yesterday. Both the New York Times and Washington Post described the role of Justice Anthony Kennedy, the member of the court who swings between the liberal and conservative camps on contentious issues. Their stories emphasized that Kennedy showed a slight preference for same-sex marriage supporters, as he said that gay and lesbian couples believe that being allowed to marry will confer dignity on them.

Both The Atlantic and Scotusblog agree with the Times and Post’s interpretation of the oral arguments yesterday. But theirs is not a consensus opinion. Consider the coverage of USA Today and Bloomberg News as well as the Heritage Foundation’s The Daily Signal, a conservative outlet. They emphasized most of the nine justices on the court asked the lead attorney for the plaintiffs a variation on one question: Why should the federal government rather than the states decide marriage policy?

… directed the bulk of his questions at same-sex marriage proponents during the argument. Although Roberts voted against gay rights two years ago, marriage advocates hold out hope of winning his vote this time.

“If you prevail here, there will be no more debate,” Roberts told Mary Bonauto, the lead lawyer arguing in favor of same-sex marriage rights. “Closing off debate can close minds, and it will have a consequence on how this new institution is accepted. People feel very differently about something if they have a chance to vote on it.”

Justice Antonin Scalia posed a similar question, according to Richard Wolf and Brad Heath of USA Today: "You’re asking us to decide it for this society, when no other society until 2001 ever had it," Scalia said, and only 11 states have approved it through the democratic process.

By all accounts, Roberts and Scalia are conservative justices, so their questions are to be expected. Yet Justice Kennedy and two liberal justices asked the lawyer for gay-marriage supporters the federalism question, according to Ryan T. Anderson, a traditional-marriage advocate and spokesman.

Consider Justice Anthony Kennedy, who asked the third question: One ­­of the problems is when you think about these cases you think aboutwords or cases, and the word that keeps the word that keeps coming back to me in this case is—is millennia, plus time. First of all, there has not been really time, so the respondents say, for the federal system to engage in this debate.

… Even Justice Stephen Breyer got in on the act, noting that marriage understood as the union of a man and a woman “has been the law everywhere for thousands of years among people who were not discriminating even against gay people, and suddenly you want nine people outside the ballot box to require states that don’t want to do it to change … what marriage is to include gay people.” He concluded: “Why cannot those states at least wait and see whether in fact doing so in the other states is or is not harmful to marriage?”

… Even Justice Ruth Bader Ginsburg, who asked the first question, noted that the Supreme Court’s decision from just two years ago seems to suggest that states have the authority to make marriage policy: "What do you do with the Windsor case where the court stressed the federal government’s historic deference to states when it comes to matters of domestic relations?”

The justices’ questions about federalism were more than a nod in the direction of state’s rights; they were an acknowledgment of the high court’s ruling in Windsor v. United States in 2013. The Supreme Court struck down the 1996 Defense of Marriage Act on the grounds that the federal government should not tell the states how to regulate marriage, according to one liberal and one conservative legal commentator.

The Times, Post, and The Atlantic referred to the court’s ruling in Windsor but did not describe its rationale in full.  If the Supreme Court upholds traditional marriage, readers who read only stories from the three publications would not know why.