Pope Francis: Christianity Is Not Sadomasochism in the Face of Suffering 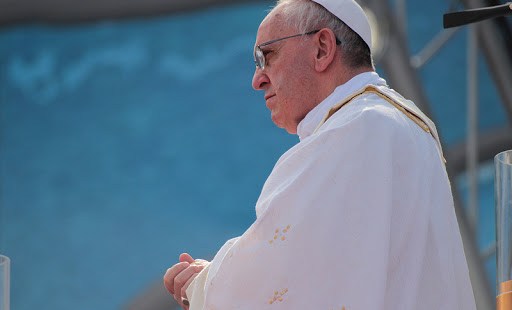 VATICAN CITY — Tribulations, trust, and peace. These are the three words around which Pope Francis developed his homily at Tuesday morning’s Mass at the Santa Marta guesthouse in the Vatican. The Pontiff pointed out that the Christian does not have a “sadomasochistic attitude” when confronted with difficulties, but relies on the Lord with confidence and hope.

When St. Paul is persecuted, despite a thousand tribulations, he remains firm in his faith and encourages others to hope in the Lord. Pope Francis was inspired by the passage from the Acts of the Apostles, in the First Reading, to dwell on these three points: tribulations, trust and peace — saying that to enter the Kingdom of God, one must “go through dark times, difficult times.”

The Christian bears tribulations with courage

However, he warned, “this is not a sadomasochistic attitude,” rather, it is “the Christian struggle” against the prince of this world who tries to tear us away "from the word of Jesus, from faith, from hope.”

“To endure the tribulations” is a phrase, the Pope pointed out, that the Apostle Paul uses frequently.

“‘To bear’ is more than being patient. It means to carry on one’s shoulders, to carry the weight of tribulation. And Christian life also has moments like that. But Jesus tells us: ‘Have courage in that moment. I have overcome; you too will be victorious.’ This first word enlightens us to go forward in the most difficult moments of life, those moments that make us suffer.”

And after giving this advice, the Pope said, Paul “organizes that Church, he prays over the priests, lays His hands on them and entrusts them to the Lord.”

Rely on the Lord in troubled times

The second word: “entrust.” A Christian, Pope Francis observed, “can face tribulations and even persecution by entrusting himself unto the Lord.” Only He, the Pope stressed, “is able to give us strength, to give us perseverance in faith, to give us hope.”

When a person makes “this prayer” from the heart, the Pope added, then he feels it is entrusted to the Lord – he is certain: :He never disappoints. Trials, reflected the Pope, make us suffer, but “trust in the Lord gives you hope and here comes in the third word: peace.”

The peace of the Lord strengthens the faith and hope

Pope Francis recalled what Jesus says as he leaves his disciples: “I leave you peace; I give you my peace.” But, he emphasized, “not a peace, a simple peace of mind,” but a peace that "goes within: a peace, too, that gives you strength, which reinforces what today we asked the Lord: our faith and our hope.”

“Three words: tribulations, trust and peace. In life we have to go down streets of tribulation but this is the law of life. But in those moments, [we must] rely on the Lord and He answers us with peace. This Lord who is Father loves us so much and never disappoints. Now we continue the Eucharistic celebration with the Lord, praying that He strengthen our faith and our hope, asking Him to give us the confidence to overcome our trials because He has overcome the world, and gives us all his peace.”