We Could Use a Little Fire and Brimstone 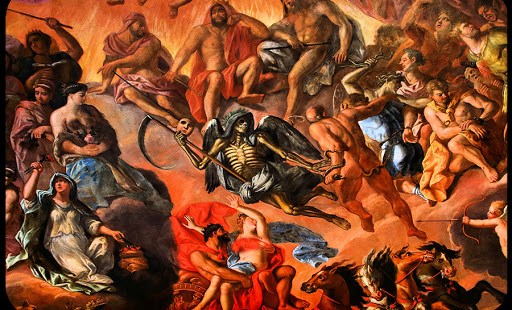 Catholicism is a most serious religion — why don’t we act as if it is?

It was his senior year, said the oldest man sitting round the table in the pub, and the first day of religion class in his Catholic high school the teacher handed out thin paperbacks printed on cheap paper. They’d had a real textbook the year before. A younger man remembered studying doctrine one year and coloring pictures the next. And the youngest at the table, a new father in his late twenties, said that all he’d known in his CCD classes was the lite version.

My companions at dinner were all victims of a revolution in catechetics. What most struck me as they talked was how sentimental was the teaching, and how light and thin it was. It sounded frivolous. The teachers may have loved the Church and the Faith, but they taught Catholicism as if it were a subject they didn’t really care about and didn’t expect their students to care about either.

The materials and methods made the Catholic Church look like one of those companies that makes products no one wants anymore and keep lowering the price in the hope — a hope even the salesmen feel is vain — that people will buy their stuff anyway. The catechetical authorities sounded like people who’d taken seriously Mary Poppins’ advice that a spoonful of sugar makes the medicine go down and decided to keep reducing the medicine and increasing the sugar.

It was fundamentally un-serious. The oldest man remembered even at the time noticing the symbolism of the big heavy hardbound book he carried to biology class and the small floppy paperback. Biology was an important subject to be mastered with effort, Catholicism wasn’t.

When I looked at Christianity as a fairly secular teenager, I was looking for something serious, something dramatic, something that mattered. Very early on the Catholic Church impressed me as the most serious version of Christianity. What her critics saw as faults, especially her dogmatism and her moral rules, I saw as signs that she knew life was a game to be played for keeps and that winning and losing meant everything. In a world that could be so frivolous about so much, even the ends of human life, she stood for the belief that the way we live means something ultimate.

That’s still true, but even so, I wish normal Catholic life were more overtly serious in this sense. I would find it a great help in not sinking into the complacency that seems to be our, or at least my, natural mode of spiritual life. (I exclude my own pastor from this, and others I know.)

We ought to hear a lot more about sin and the broad road to Hell, for example, than we do. And about Purgatory too. We don’t get a sense from most preaching and Catholic writing that our choices actually matter. We move in only one direction, and that’s up. God is infinitely indulgent (which is not the same thing as infinitely loving). He is always ready to let us back in apparently without our having to repent, as long as we feel regretful. Sins don’t leave a mark.

In all the homilies on the Parable of the Prodigal Son I’ve heard, the priest has always emphasized the father’s welcome, and sometimes touched on the older brother’s resentment. It is indeed a story about God’s never-ending love for us, but it is also the story of the prodigal son’s return, and that I’ve never heard spoken of.

The son had to walk a long way as a starving man with no money to get to his father. He hadn’t just moved into town and started partying, he had travelled to a far-off land. It was a long way back and getting home cost him. And when he finally got home, he had to tell his father he was sorry even after his father embraced him. Returning home didn’t make his life as it had been before. Although his father forgave him for rebelling, he’d thrown away his inheritance and picked up who knows what diseases.