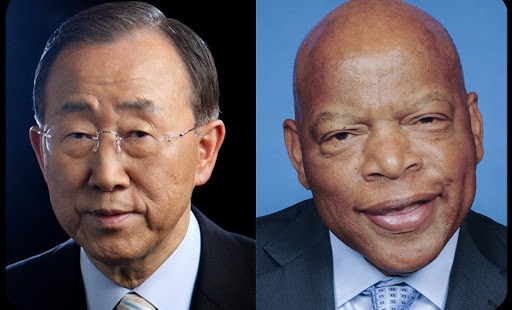 United Nations Secretary General Ban Ki-moon will address the graduating class of the School of Foreign Service on May 16, and he will receive an honorary doctorate. He is a vocal advocate for universal access to abortion and contraception around the world.

Last May, Pope Francis met with Ban Ki-moon and other U.N. leaders to press for respect for human life, insisting that “life is sacred and inviolable from conception to natural death.” But in September, Ban Ki-moon publicly reiterated his support for “the importance of sexual and reproductive health and reproductive rights,” quoting a Filipino woman who said, “A woman should have the right to choose how many children she wants. It’s a basic human right.” The U.N. has consistently defined “reproductive health” to include abortion as well as contraceptives.

Congressman John Lewis of Georgia will speak to the McCourt School of Public Policy and receive an honorary doctorate on May 14. Lewis has a consistent pro-abortion voting record and earned 100 percent ratings with the National Abortion Rights Action League (NARAL) Pro-Choice America in 2013 and 2014. He voted against banning partial-birth abortions and minor limitations to abortion access.

Lewis is also speaking at another Catholic college commencement this year—at the College of Our Lady of the Elms, also known as Elms College, in Chicopee, Mass.

In 2004, the U.S. Conference of Catholic Bishops declared: “The Catholic community and Catholic institutions should not honor those who act in defiance of our fundamental moral principles. They should not be given awards, honors or platforms which would suggest support for their actions.”

In past years, Georgetown has hosted and honored commencement speakers who publicly oppose the Church’s teaching on the sanctity of life. In 2011, Georgetown honored former Secretary of State and University professor Madeline Albright—a prominent abortion advocate—as speaker at the Master of Science in Foreign Science (MSFS) awards ceremony. And in 2012, Health and Human Services Secretary Kathleen Sebelius was invited to speak at the University’s Public Policy Institute during a commencement event, despite her leadership on the HHS mandate, denying religious freedom to employers who oppose abortion, sterilization and contraception. The Cardinal Newman Society initiated a petition urging Georgetown to rescind the invitation to Sebelius, but the University refused.

“We are fortunate to welcome an extraordinary breadth and depth of leaders to share their insight during this year’s Commencement Weekend,” University President John DeGioia stated in this year’s commencement speaker announcement. “Our speakers bring a great range of perspectives from their experience as distinguished leaders in journalism, public health,international law and public office and will inspire our graduates as they take the next step toward their professional, academic and personal aspirations.”