Marching for Life in the Eternal City

ROME — Sunday, May 10th, marked the 5th annual March for Life in Rome. Thousands of marchers gathered on the Via della Conciliazione in front of St. Peter’s Square to bear witness to the sanctity and inviolability of human life from conception until natural death.​

Despite the victory of the pro-life cause in the IVF referendum held shortly after Pope Benedict’s election, the cause of life and the family has declined in recent years in Italy. The Italian Parliament has just legislated to render divorce much easier, and the Italian birth-rate, the worst in Europe, is unsustainably low, an aspect of the Mediterranean refugee crisis little reported by the secular media.

A passionate witness of Italian pro-lifers and participants from around the world offered an alternative path to an increasingly secular culture. Pope Francis greeted the marchers in his Regina Caeli address, just as he did in person shortly after his election to the papacy in 2013.

The establishment of the March for Life in Rome, in imitation of the annual demonstration in Washington, DC, was also inspired by Pope Benedict XVI’s January 19, 2012 address to American bishops, in which he called for an “engaged, articulate and well-formed Catholic laity” to present the “Christian vision of man and society” in the public square.

Pope Benedict told US bishops: “With her long tradition of respect for the right relationship between faith and reason, the Church has a critical role to play in countering cultural currents which, on the basis of an extreme individualism, seek to promote notions of freedom detached from moral truth.

He added: “The Church’s defense of a moral reasoning based on the natural law is grounded on her conviction that this law is not a threat to our freedom, but rather a ‘language’ which enables us to understand ourselves and the truth of our being, and so to shape a more just and humane world.”

“The Church’s witness, then, is of its nature public,” he said. “[S]he seeks to convince by proposing rational arguments in the public square. The legitimate separation of Church and State cannot be taken to mean that the Church must be silent on certain issues, nor that the State may choose not to engage, or be engaged by, the voices of committed believers in determining the values which will shape the future of the nation.”

As has become tradition, the distinctive figure of one American prelate, Cardinal Raymond Leo Burke, in the attire of his office was seen walking alongside the other marchers in defense of life. 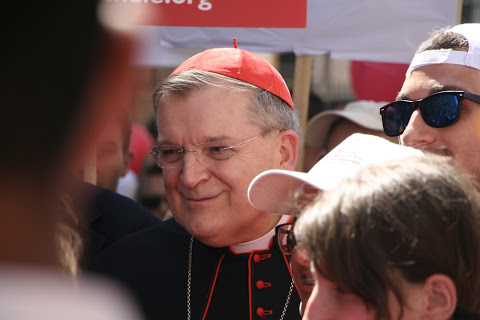 “Cardinal Burke has been with us since we came to Rome,” said Rome March for Life organizer, Virginia Coda Nunziante. “He led the prayer vigil with us, and delivered a wonderful talk, as he also did this year at the Church of San Salvatore in Lauro. And he comes dressed as a cardinal. He’s become such a point of reference for so many people.”

The march extended as far as the eye could see as it progressed from the Vatican to the vicinity of the Circus Maximus.

The crowd was addressed by pro-life leaders from around the world, and many more organizations participated in the march itself.

Nunziante said: “We have to be the strong voice of this significant minority in order to become a majority in Italy. In the United States, when the pro-life movement started, they too were the official minority. But now they are 51%. This is an extraordinary result, and I suspect that in Italy the percentage of those who are pro-life is greater than those who are pro-abortion, but they are scared to say it.”

She then observed: “If you are against abortion, you have to be quite courageous. And so what they need to be given is the courage of their convictions. These marches offer that courage. They show people that they are not alone, that there are many others who think as they do, and who want to send a powerful message to politicians and stop abortion, who do not want euthanasia to be legalized.” 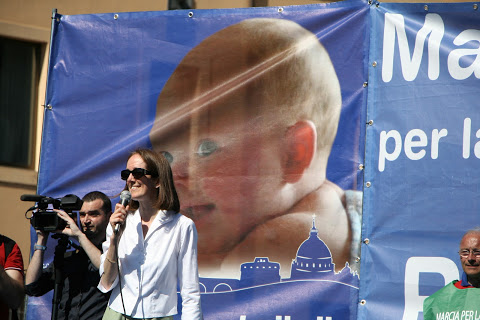 The Italian pro-life leader believes that the American experience holds many lessons for Italy.

As he accompanied marchers, Cardinal Burke said: “It seems to me that the march grows stronger every year and is giving an ever more powerful witness to the absolute respect owed to defenseless life. So I’m very pleased. I’m not good at judging numbers, but we’re covering a long distance with marchers, and that’s very good.”

Despite the march’s success, noted Italian historian Roberto De Mattei said: “The numbers are not the most important thing. What is most important is that there are many people here from Italy, the United States, Canada, New Zealand, Croatia, Romania, Russia, and South America. There is great enthusiasm. We are very pleased about the participation of Cardinal Burke and the many other priests who are here. There are many more priests this year than ever before.”

One American Dominican priest at the march praised the Italian initiative, saying: “I think it’s beautiful to see the Italian flavor of being in favor of life, the music [from brass bands to Mozart], the floats, and the liveliness — I haven’t seen it in the US. It has all the marks of Italian enthusiasm. I believe that it will be good for Italians to see that the pro-life march is not simply American. It’s international.” 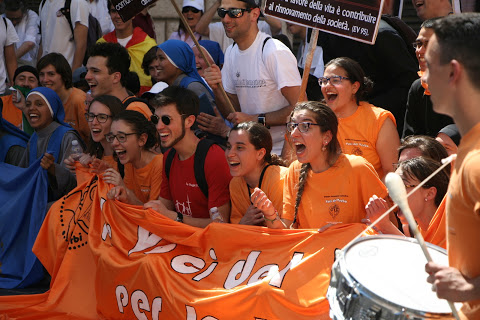 Commenting on the significance of the march, De Mattei added: “The March for Life is an act of love for God. It defends the primacy of the rights of God over the pseudo-rights of men, as abortion is defined. This is a strong protest against abortion, against euthanasia. All the people present here have come out in defense of innocent life from conception until natural death. It is a strong message to the political class, to the bishops, and to the media.”

When asked what message it will send to the synod fathers set to meet this October to discuss the Church’s teaching on the family, De Mattei replied: “That it is important to listen not only to questionnaires, but above all to the voice of the simple people, the faithful laity, the sensus fidei, which is important and which expresses fidelity to the doctrine of the Church.”

De Mattei then added: “But it is not only a question of fidelity to the Magisterium. There is also a God-given natural law which belongs to every man. This march is a manifestation of those convictions.”

De Mattei was not the only one to suggest that the March for Life gives more authentic expression to the sentiments of the lay faithful than surveys of the baptized.

Benjamin Harnwell, Founder of the Dignitatis Humanae Institute said: “Mother Teresa always insisted that a society which wants to recognize the human dignity of its citizens after birth must start with recognizing their human dignity before birth. It’s for that reason that the March for Life today in Rome and all the marches for life that take place around the world are so providential."

Harnwell added: “Wherever one looks to parliaments across the world legislating against human dignity, every single person here on this march is testifying to the fact that every single human person without exception, from conception until natural death, has an absolute human dignity that must be recognized. Nobody in society is more poor or more vulnerable than somebody who doesn’t have a voice, and we’re here to speak up for those people.”

Dr. Alan Fimister of the Dialogos Institute concurred: “People should take a second look at the writings of Blessed John Henry Newman. Too much time is wasted consulting the laity in matters of doctrine. It is time to start consulting the faithful.”

The theme of “Pro-Life, No Compromise” was embodied at the Rome March for Life in Mary Rathke of Michigan, who was herself conceived in rape and has devoted her life to representing others in the same position. 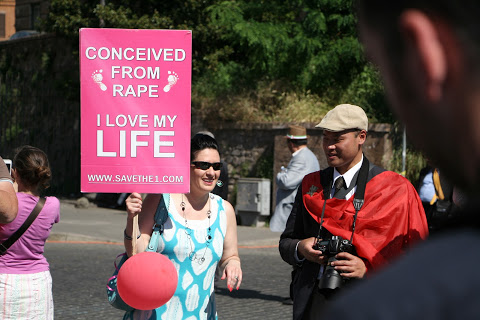 “I’m very proud of them for taking as their theme: ‘Pro-Life, No Compromise’,” Rathke said, “because in many places they use the exception of rape to make abortion legal.”

Rathke, who is happily married and the mother of four, discovered at the age of 32 that she had been conceived in rape. Her unwavering conviction is that abortion is not the answer.

“When a woman is raped and conceives a child, there are two victims, and we don’t kill one victim to make the other one feel better,” she said. “People think that abortion is the answer, but honestly it does not make the memories of the rape go away. It just compounds her trauma.”

“Women who do have their children say it was the best thing that came out of it,” she said. “God gave them beauty for ashes. And what man meant for evil, God used for good.”

"You give a child a family and a life. You’re not giving them away. You’re giving them a gift, and you’re saying that their life matters. They have a beating heart, and they feel pain, and they are worthy of life,” she said.

Rathke then added: “I’m so very thankful that my mother had me. And I am here at the Rome March for Life to speak out for all the women who have been too ashamed to speak of the pain they have gone through, and for all the children who think it’s a shameful thing. When they see my sign, they can know that, even though they were conceived in rape, they can love their life and be happy and proud they are alive.

A living witness to “Pro-Life, No Compromise,” Rathke concluded: “We don’t like being an excuse for laws. We walk for life.”