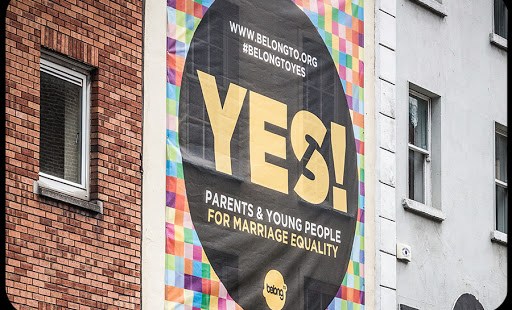 The Irish have always been known for their wit and creativity with words, whether in the English language or traditional Gaelic.

But some may now feel they have taken things a wee bit too far.

Ó Ríordáin might be expected to say such a thing. He is Ireland’s "Minister of State for Equality."

But it’s not just him saying it. As he pointed out with an interview with National Public Radio, the English wording of the referendum that goes before Irish voters on Friday uses that language. The referendum is 17 words in English. Voters are being asked whether "marriage may be contracted in accordance with law by two persons without distinction as to their sex."

Ó Ríordáin compares the proposition to the expansion of voting rights in 1922.

The Catholic bishops in Ireland, as might be expected, are having none of it. In March, the Irish Catholic Bishops’ Conference issued a statement urging voters to think seriously before approving a referendum that would change the nature of marriage.

"Marriage is of fundamental importance for children, mothers and fathers, and society," the statement said. "We ask the people of Ireland to consider very carefully the profound implications which this constitutional amendment would have on the family environment and on our understanding of parenthood."


We come to this debate believing that the union of a man and a woman in marriage, open to the procreation of children, is a gift from God who created us "male and female."

Reason also points to the truth about human sexuality that makes the relationship between a man and a woman unique. Mothers and fathers bring different, yet complementary gifts and strengths into a child’s life.

We cannot support an amendment to the Constitution which redefines marriage and effectively places the union of two men, or two women, on a par with the marriage relationship between a husband and wife which is open to the procreation of children.


The bishops also expressed concern that, should the amendment pass, it will become increasingly difficult to speak any longer in public about marriage as being between a man and a woman.

"What will we be expected to teach children in school about marriage?" the bishops asked. "Will those who sincerely continue to believe that marriage is between a man and a woman be forced to act against their conscience?… Already, in The Children and Family Relationships Bill, it is proposed to remove mention of mothers and fathers from a whole raft of previous legislation."

And, as if to offer a warning about legal implications if same-sex marriage is legalized in the Irish Republic, a judge in Northern Ireland, which is part of the UK,
declared on Tuesday that a bakery acted unlawfully when it refused to bake a cake for a customer with a pro-homosexual marriage message written on it. "The judge ordered the family-run Ashers Bakery to pay [the customer] 500 pounds ($775) and legal costs, which have run into the tens of thousands," AP reported.

Ireland decriminalized homosexuality 22 years ago and allowed "civil unions" five years ago. If Ireland’s marriage "expanders" prevail this time, the vote would be historic not only because a nation with an ancient and deep Christian heritage has given its approval to something so contrary to Christianity, but because it would be the first time a country has voted to redefine marriage. NPR noted: