St. Dominic Leads the Way into the Third Millennium

The inspiration for today's renewal

Almost 800 years lie between his death and my birth, and yet I claim Dominic de Guzman as my teacher.
Such is the influence of this Spaniard, born in rural Calaruega, near the Benedictine abbey of Santo Domingo de Silos in 1169. 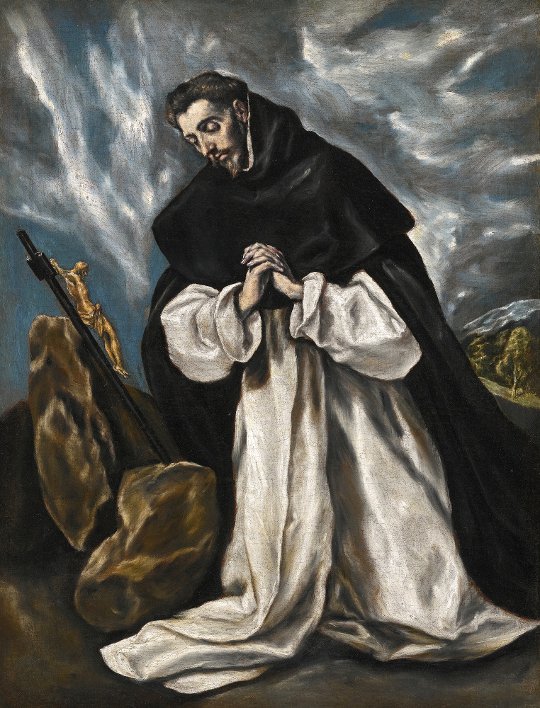 Educated in Palencia, a legend emerges about Dominic in 1191, during a famine. Young Dominic gave away his money and sold his clothes, furniture and precious manuscripts to feed his hungry neighbors; he reportedly told astonished fellow students, “Would you have me study off these dead skins, when men are dying of hunger?”

His parents, Juana and Felix, were “honored and wealthy," and some say they came from a minor branch of the great noble family, de Guzman. Dominic’s mother, Juana of Aza, was beatified by Pope Leo XII in 1828. In any event, the story is told that before his birth, Juana made a pilgrimage to the Abbey and there dreamt that a dog leapt from her womb carrying a torch in its mouth, and “seemed to set the earth on fire”.1

In 1194, around age twenty-five, Dominic joined the Augustinian Canons Regular. Ten years later he accompanied the Bishop on a diplomatic mission to Denmark. The envoys traveled via Aragon and the south of France. There, they encountered the Cathars, a heretical religious sect with gnostic and dualistic beliefs that was spreading throughout southern France. This was to prove to be a singularly auspicious meeting for the Church.

The Cathars bore some resemblance to modern cults in that they stressed vegetarianism and "pure" living. Strongly elitist in nature, their followers aspired to be "illuminati"– that is, considered to have privileged access to higher spiritual truths. They spurned sexuality and family life, purporting to focus on invisible "spiritual goods" alone. They called themselves "Pure Ones" after their Goddess known as the Pure One, the "Virgin Great Creator Mother Mari."

Birth of the Dominicans

The Cathars’ baleful influence was especially felt in the emergent cities of the era, and Dominic responded with a new concept for a religious order which would combine dedication and systematic education, with more organizational flexibility than either the monastic orders or the secular clergy of the time.

He also subjected himself and his companions to the monastic rules of prayer and penance and the local bishop Foulques gave them written authority to preach throughout the territory of Toulouse. In 1215, Dominic established himself, with six followers, in a house there. By January 1217, they had gained papal approval for “The Order of Preachers” (“Ordo Praedicatorum”, or “O.P.,” popularly known as the Dominican Order).

Despite the fact that Dominic died in 1221, ten years before the office of the Inquisition was established in 1231, "Dominic the Inquisitor" became one of the most famous figures in the infamous "Black Legend" about Spain.

Historians now agree that 16th- and 17th-century Protestant polemicists created and perpetuated the legend of Dominic the Inquisitor. This image gave German Protestant critics of the Catholic Church an argument against the Dominican Order whose preaching had proven to be a formidable opponent in the lands of the Reformation.

According to his biographer Guiraud, the real Dominic lived an austere life, “observed stated fasts and periods of silence," ”selected the worst accommodations and the meanest clothes," and “never allowed himself the luxury of a bed."

“When travelling, he beguiled the journey with spiritual instruction and prayers” and “as soon as Dominic passed the limits of towns and villages, he took off his shoes, and, however sharp the stones or thorns, he trudged on his way barefooted” and that “rain and other discomforts elicited from his lips nothing but praises to God."