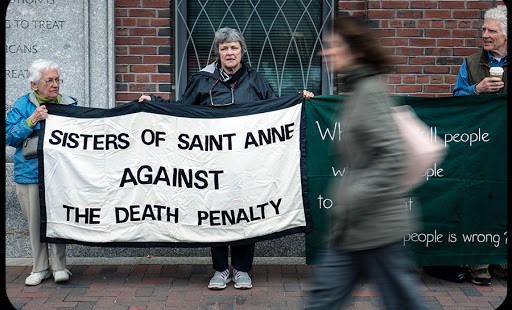 Twenty years after its release, Dead Man Walking remains a stunning achievement in moral filmmaking – and with the trial of Dzhokhar Tsarnaev gripping the country, has never been more relevant.

Based on Sister Helen Prejean’s advocacy for a death row inmate in the early 80s, the film is a balanced look at one woman’s quest for mercy in a community thirsty for justice. Prejean, a meek and mild-mannered nun, unexpectedly finds herself visiting and counseling Matthew Poncelet, a man charged with the brutal rape and murder of two young teenagers. On the face of it, a narrative around a falsely accused man, a deeply repentant man, or at least a likable man would make a more effective commentary about ending the death penalty. But the fictionalized Poncelet is none of these things: he lauds Hitler, makes racially charged comments, and makes an aggressive sexual remark at the one person in the world trying to help him. Sister Prejean sits through the harrowing accounts of the victims’ parents, who describe the crimes committed against their children in gut-wrenching detail; but Poncelet rebukes her every attempt to make him shoulder any responsibility.

The debate on the death penalty has heated up in the weeks leading up to the trial of Dzhokhar Tsarnaev, who along with his older brother Tamerlan was responsible for the 2013 Boston Marathon bombings. Once again, Sister Helen Prejean came on the scene to advocate for life – and once again, the odds were stacked against her. There was overwhelming evidence that Tsarnaev committed this heinous act of terror. He didn’t appear to have the slightest bit of sorrow or repentance for what he had done and showed absolutely no emotion in court. Still, Sister Prejean met with Tsarnaev, testified on his behalf, and pleaded for his life.

Tsarnaev’s case, like Poncelet’s, is one of the toughest situations to stand athwart the rush toward execution. But the power of these cases lies in that contrast. Even though Prejean’s mission to rescue these men can look and sound naïve, quixotic, and even downright insane, through it all she remains by their side, fighting for their lives, both physically and spiritually. To see why is to see what Prejean’s principled opposition to the death penalty is all about.

In the end, it’s not an appeal to a criminal’s innocence or kindness; Tsarnaev, like the Poncelet character, has blood on his hands, and doesn’t appear to really understand or care about the consequences of what he did.

It’s not about honoring the memory of the victims. The parents of the youngest victim of the bombing, 8-year-old Martin Richard, pleaded with the Department of Justice to take the death penalty “off the table,” arguing that life in prison would avoid prolonging the case into years of appeals, needlessly keeping their son’s killer in the spotlight.

It’s not about the positive (or negative) social consequences that stem from capital punishment. William Campbell, whose daughter was killed in the bombing, hopes that “this decision will be a deterrent.” Others argue that with a violent ideology eager to recruit martyrs in the background, the decision could just as easily have the opposite effect. Whatever the outcome, there’s more to the decision than just the consequences.

What her opposition is finally about is a “seamless garment” ethic that always safeguards human dignity. Prejean, animated by her Catholic faith, believes that “all of life is sacred and must be protected.”

The Catholic Church, it’s often pointed out, is out of step with the American people on a great many issues. Percentages and polls are routinely trotted out to illustrate the Church’s archaic attitudes on sex, marriage, and religious liberty. What’s perhaps less known is that its position on the death penalty is one of them.