Ending the Speculation About Oscar Romero, A Martyr for the Gospel 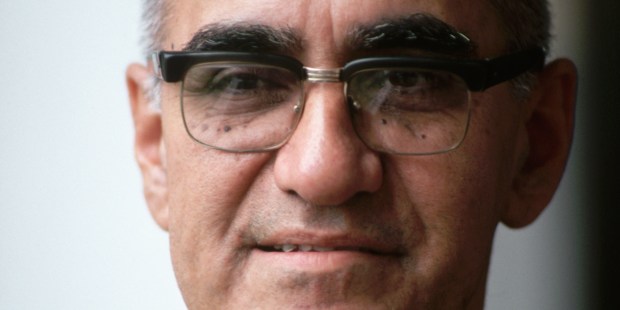 Leif Skoogfors/CORBIS/Corbis via Getty Images
A 1979 portrait of Archbishop Oscar Romero of El Salvador, an outspoken proponent of human rights. Romero was assassinated March 24, 1980 as he said Mass at a hospital chapel. (Photo by �� Leif Skoogfors/CORBIS/Corbis via Getty Images)
Share
Print
Gian Franco Svidercoschi | May 23, 2015

Archbishop Romero to be beatified on Saturday in San Salvador

ROME — He was already a marked man, his fate had been decided. And Oscar Arnulfo Romero himself knew that he couldn’t escape death. For his commitment to the poor, his protests against the absence of even the smallest opportunities for justice and democracy, and especially for his courageous denouncement of the government, against the “death squads,” who were perpetrators of appalling crimes — for all of this, the Archbishop of San Salvador had become a permanent threat, not only to the military regime but also to the economic oligarchy, to the large landowners.

The powers that be had decided that it was time to silence that “voice.” The killer was given the green light, and on March 24, 1980, he assassinated the archbishop at the altar while he was celebrating Mass— the most sacred moment for a priest, when he elevates the Host in remembrance of the Sacrifice of the Son of God.

Everything had been planned, everything decided. But if it had happened, if the murder had been accomplished, it was also because Archbishop Romero had been left alone — tragically alone. Defenseless. And increasingly exposed to the dangers that were gathering about him.

He had been left alone by his own confreres, that is, by nearly all the Salvadoran bishops, including his auxiliary and, to some extent, also by the nuncio at the time. They were all behind the defamatory allegations which for months had been arriving at the Vatican, and which were painting Romero — to the point of requesting his resignation — as a Communist, and even as a subversive, an extremist, and an instigator of violence. They had been so convincing in their accusations that Romero, upon his arrival in Rome, not only was not listened to by any of the heads of the Roman Curia, but a thousand obstacles had been created to prevent him from being received in audience by John Paul II.

Finally, on May 7, 1979, the meeting took place. If before, Pope John Paul II had nourished some reservations about the archbishop’s behavior, due to the less than objective information that had been sent to him, in listening to Romero’s moving and dramatic account, he was convinced that the truth lay elsewhere.

Yes, he recommended that he be prudent and balanced. He also recommended that he do everything possible to restore unity in the episcopate. Nevertheless, he supported him in his evangelical boldness, and even in the criticism of the military regime. In conclusion, he had a substantially favorable impression of the Salvadoran prelate, and pledged to make known his sentiments in a Curia still suspicious and opposed to him.

But Archbishop Romero had not been left alone only within the Catholic world. Paradoxical as it may seem, his solitude was accentuated precisely by those who wanted to exalt him. They had advanced the great myths of the guerrilla Left in Latin America, Camilo Torres, Che Guevara, Salvador Allende. They made him the model of that liberation theology that was imbued with the Marxist ideology of class struggle. And so, if the goal — assuming it was always in good faith — was to defend Romero, they nevertheless ended up enclosing him in the distorted, and exclusively political and revolutionary image that was the origin of his own death sentence, decreed by the military dictatorship and by the economic powers.

However, it only worsened after his death. Having left Romero scandalously alone in life, doubly scandalous was the insult to his memory after he was brutally murdered. There was in fact someone — on the “right” and on the “left,” to put it rather banally — who continued to insult, or at least to exploit, the name and testimony of this man of God. A man who, in his love for the poor and oppressed, and in defense of human rights, had lived the Gospel even to the sacrifice of his life, even to martyrdom.