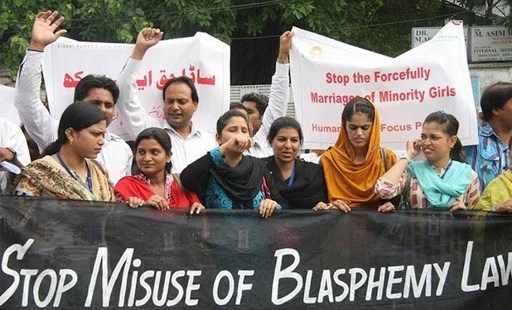 Pakistan’s anti-blasphemy laws once again are at the center of a dispute in which the lives and safety of Christians were threatened.

The incident began in ways similar to past occasions involving the laws, which forbid descecration of the Quran. A man in Lahore claimed to have seen a young Christian, Humayun Faisal Masih, burning pages of the Islamic holy book. According to a senior official, police arrested Masih after discovering a box of half-burnt pages of the Quran in his possession. But the arrest, apparently, was not enough for an angry mob. Newsweek in Pakistan reports:


Shortly after police took Masih into custody, a small mob led by local clerics gathered outside the Ravi Road Police Station and demanded the accused be handed over to them. After police refused and forced the crowd to disperse, the clerics started walking toward Masih’s home. “The mob grew and started chanting against the [Christian] community. They also attempted to attack houses and a local church,” said [the senior official].

A local Christian named Jackob Masih said he hadn’t even heard about any alleged blasphemy until his home was attacked by the mob.

“Last night, many people showed up outside my house and started chanting slogans against Christians,” he told Newsweek, adding, “they damaged our property and several other houses around the neighborhood.”

Jackob said one of the mob leaders also attempted to grab his children. “Fortunately, they managed to evade capture by running away from the back of the house,” he added.

The mob began pelting the police with stones when they tried to disperse them. The department sought reinforcement from the Punjab Rangers, a paramilitary force in Pakistan.

Another local, Samuel Masih, said the mob’s ire appeared to be directed at the small community’s church. “I don’t know what would have happened if police or Rangers hadn’t shown up and chased them off,” he said.

According to Fides news agency, Christian human rights lawyer Sardar Mushtaq Gill visited the affected areas and met some of the residents. "They are terrified and scared," he said. "It has become difficult for Christians to live with Muslims, especially when the blasphemy law is abused. We ask the international community to help bring its abolition in Pakistan."

Previous incidents of the blasphemy laws being used as a pretext for attacking Christians include a Christian neighborhood in Lahore, the Joseph Colony, being set alight by a mob of thousands in 2013. In March, members of the Taliban killed 23 and injured 70 in a suicide attack on two churches in the Christian area of Youhanabad. And last November, a Christian couple was bludgeoned to death over alleged blasphemy. An anti-terrorism court charged 106 suspects with that killing May 22.

Nasir Saeed, director of the UK-based NGO Centre for Legal Aid, Assistance and Settlement (CLAAS), said in a statement: "No one should be allowed to take the law into their own hands. Mass attacks against entire communities show that hate against Christians is growing. The blasphemy law is widely used for revenge, but the government has not yet managed to take steps to stop the misuse of the law and ensure security for Christians. If those responsible are not punished, those who attack with impunity Christian neighborhoods and churches are encouraged."

CLAAS provides free legal aid to those who are charged under the blasphemy law and also campaigns to stop its misuse. It says the blasphemy laws are widely misused by individuals to settle personal vendettas.

The laws are also in dispute in the case of Asia Bibi, a Christian mother who faces the death penalty for defaming the Prophet Muhammad. Her supporters say she was wrongly accused by a Muslim woman after the two had a minor spat.

According to
Archbishop Sebastian Francis Shaw of Lahore, Sunday’s melee could have become much worse. In a statement to Aid to the Church in Need, Archbishop Shaw said that since attacks on two churches in Lahore in March, he has established relations with politicians and representatives of the local Muslim community. "Their support has enabled us to avoid the worst," he
said. When he first heard about the developing commotion Sunday evening, he immediately asked for their help.

"Thanks to their intervention the police managed to disperse the crowd by midnight," he said.