The Jim Gaffigan Show’s Funny Look at Faith and Media 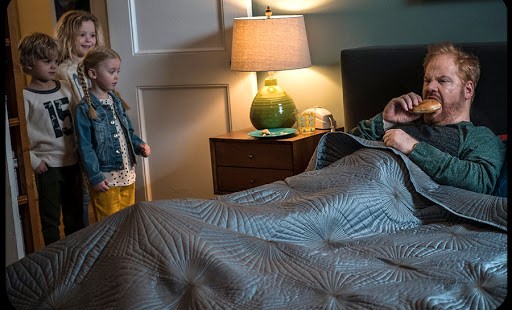 The Jim Gaffigan Show will officially premiere on TV Land on July 15, but the stand-up comedian has already put the first episode up for free on his website.

The series is loosely based on Gaffigan’s own life, which as fans know revolves around his five kids and “Shiite Catholic” wife (who shares writing and production duties for the show), their two-bedroom apartment in Manhattan, and a passion for comedy rivaled only by a passion for food.


While Gaffigan is probably best known for his “Hot Pockets” and “Bacon” bits, the pilot hints that the show’s target will be Gaffigan himself – and both the enthusiastic and wary reactions people have to his life choices.

The show begins with Gaffigan’s wife asking him to pick up a Bible blessed by the Holy Father at their parish. After he takes it with him to a comedy club to banter with Chris Rock, word gets around town that Gaffigan has made a very public display of his faith. He promptly panics about being “outed as a Christian”:

“I don’t want people to think I believe in God…The perception is that people who believe in God are stupid…I don’t want to get involved in the culture war. Religion’s iffy. Once you identify yourself as believing something, you open yourself to ridicule.”

His fears turn out to be justified. The listless comic watches helplessly from his bed as a “who’s who” of cable news anchors launch an all-out media offensive about Gaffigan’s “divisive,” “bigoted,” and “twisted personal agenda,” interpreting the act as step backwards for women’s rights and interfaith dialogue and speculating about the comic’s scandalous and self-destructive private life. Gaffigan’s reputation is eviscerated by a hailstorm of hot button issues; meanwhile, the poor guy is just stress-eating bagels in his bed like a postmodern version of Chaplin’s hapless tramp.

With more typical shows like Impastor and The Real O’Neals on deck – both of which thrust social issues on religion-centered storylines – Jim Gaffigan offers a bold new approach that deconstructs our cultural obsessions around faith. The pilot doesn’t shy away from the everyday realities of the Gaffigans’ Catholicism – there are crucifixes in the bedroom and kitchen, a parish priest, confession jokes, references to Jesus, and the infamous Bible – but all of it is like the calm, steady ship on which the comic and his family sail. Their faith isn’t intended to attract attention, drum up controversy, or alienate friends – it’s just what they believe and live by as a family.

But that’s exactly what it does. When all the wild social and political spins in the world descend on them, it’s not only hilarious – it’s also saying something profound. Armed with the deadly weapon of “Catholic unseriousness,” Gaffigan has turned the tables on a hair-trigger media culture, one which projects its own imbalance onto innocent expressions of faith. Newscasters from almost every major news channel get in on the joke for the show, but the joke really seems to be on them.

In “Mr. Universe,” Gaffigan infused a bit about McDonald's with some biting social commentary. “You have your own McDonald’s,” he riffed. “Maybe instead of buying a Big Mac, you read Us Weekly. Hey, that’s still McDonald’s. It’s just served up a little different. Maybe your McDonald’s is telling yourself that Starbucks Frappuccino is not a milkshake. Or maybe you watch ‘Glee.’ It’s all McDonald’s – McDonald’s of the soul: Momentary pleasure followed by incredible guilt eventually leading to cancer. ‘I’m lovin’ it.’”

The Jim Gaffigan Show looks like it might follow this trajectory. The pilot is light-hearted and goofy and fun, but at its core is a golden chicken nugget of delicious wisdom.