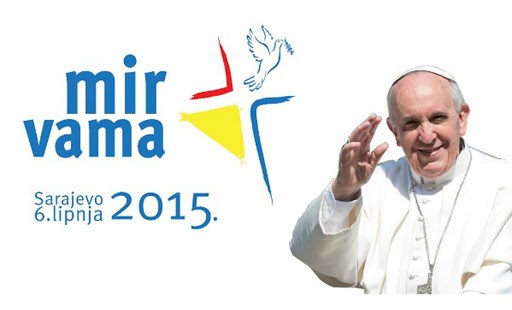 VATICAN CITY — With just a few days remaining before his Saturday, June 6th visit to the capital of Bosnia-Herzegovina, Pope Francis has sent a video-message to the people of Sarajevo.

“I am coming among you, with God’s help, to confirm in the faith the Catholic faithful, to support ecumenical and interreligious dialogue, and especially to encourage peaceful coexistence in your country,” the Pope said. He asked the nation’s citizens to pray that his upcoming visit bear fruit among Christians and throughout society.

“Peace be with you,” is the motto of the Pope’s visit. It is taken from St. John’s Gospel account of Jesus’ encounter with his disciples on Easter evening.

In his video-message to the people of Sarajevo, Pope Francis said: “I am preparing to come to you as a fellow messenger of peace, to express to everyone — to everyone! — my esteem and friendship. I would like to announce to every person, to every family, to every community the mercy, the tenderness and the love of God.”

With a population of 3.8 million people, Bosnia-Herzogovina is divided into the majority Bosnian Muslim community, or Bosniaks, who number 40 percent; a sizable Serbian, mainly Orthodox, population comprising 31 percent, and a smaller minority of largely Catholic Croats, who make up about 15 percent of the nation’s inhabitants.

At a press conference to welcome the announcement of Pope Francis’ visit to Sarajevo, Cardinal Vinko Puljic, Archbishop of Vrhbosna, said regarding the Pope: “He announced that he would come as a pilgrim of peace to support the building of peace in our country. Pope Francis has a particular empathy for the poor and the suffering. That’s why he’s interested in us.”

“When I went to greet him after his election, the first thing he told me was: ‘you  come from a Church that suffers.’ He knows that the people suffered a lot here, and still suffer. He knows our situation very well,” the archbishop added.

Cardinal Puljic recently told the Catholic Herald that although the 1995 Dayton peace agreement ended the bloodshed, nevertheless it favored majority groups who “did not care for equal rights for all,” leaving minority groups weakened and consistently out-voted.

The Archbishop said the nation’s complex political structure is currently unsustainable, unjust and must be changed.

Bosnia-Herzogovnina has the highest youth unemployment rate in the world, with an 63 percent of 15 to 24 year-olds unable to find work.

The Catholic Church is currently struggling, Cardinal Puljic explained. The number of Catholic faithful declined by 50 percent during the war, and their numbers continue to drop due to migration and shrinking birthrates.

Pope Francis was invited to Sarajevo last year to mark the 100th anniversary of the beginning of World War I, which was triggered by the assassination of the Austro-Hungarian heir to the throne in Sarajevo on June 28, 1914.

His visit coincides with the anniversary of D-Day, June 6, 1944, when the Allied invasion of Normandy, called Operation Overlord, marked the start of the Allies massive push into German-occupied Western Europe during World War II, leading to the liberation of France from Nazi control.

The Pope’s intense schedule includes meetings with government officials, bishops, leaders from the Orthodox, Jewish, and Muslim communities, Catholic clergy and religious, and young people. Pope Francis will also celebrate Holy Mass in the same Olympic Stadium where Pope St. John Paul II celebrated the liturgy in a snowstorm during his visit to war-ravaged Sarajevo in April 1997.