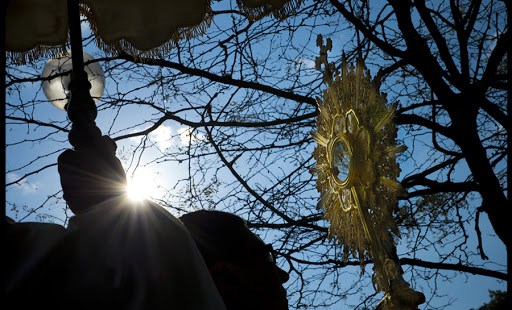 How to do the great feast of the Eucharist right

In 1928, Myles Connolly published a small novel entitled Mr. Blue. A compliment to G.K. Chesterton’s life of Saint Francis of Assisi and as a sort of anti-Gatsby (Fitzgerald’s The Great Gatsby had been published three years before), Mr. Blue tells the story of a young man—Blue himself—who decides to live out the Christian Faith in a serious, transforming way. Like J. Gatsby, Blue lives a life of extremes, we might even say of excess, but it is a far cry from the extravagance of the 1920s. Blue’s love affair with St. Francis’ “Lady Poverty” leads him to live in a packing crate atop a skyscraper, in mansions, in a Boston lodging house and, finally, the ward of a public hospital. He works odd jobs and survives on “backdoor begging.” He prays and he shares his faith with everyone he meets.

Mr. Blue has much to say to us about how faith in Christ can shape a life, transforming a person’s very existence into an act of Eucharist—an act of Thanksgiving—that by its very nature draws others into communion.

In the novel, Blue tells the story about the kingdom of the Antichrist: the days of the “the ecstatic, passionate, beauty-loving, liberty-seeking people had, as was early predicted, come to a close. The sluggish frigid races had survived.” In the climax of Blue’s tale of a new world in which even laughter and curiosity had been forbidden by law, a priest, the last Christian, climbs the highest tower in a city of metal and, using hosts made from wheat he has grown himself, offers the last Mass, fulfilling his promise to “bring God back to the earth.” As the government’s forces prepare to destroy the priest high atop the tower using planes and bombs, the priest began to repeat the words of Christ as the Last Super (cf. 1 Corinthians 11:23-26):

One plane is now low over the roof of the tower, so low that the crew can make out the figure of the cross on the priest’s chasuble. A bomb is made ready…

And now the priest comes to the words that shall bring Christ to earth again. His head almost touches the altar:
Hoc est enim corpus meum…

The bomb did not drop. No. No. There was a burst of light beside which day itself is dusk. Then a trumpet peal, a single trumpet peal that shook the universe. The sun blew up like a bubble. The stars and planets vanished like sparks. The earth burst asunder… And through this unspeakably luminous new day, through the vault of the sky ribbed with lightning came Christ as he had come after the Resurrection.


The image of a lone priest standing atop a tower in a burned-out world from which even the most basic expressions of joy, fraternity, and human freedom had been banned is a powerful one. But, its force isn’t found in the revolutionary act of the priest but in the way we are reminded of the expansive power of the Eucharist.

Here are four thoughts that might help you better celebrate the great feast of the Eucharist—Corpus Christi.

1. Corpus Christi is a celebration of the transforming power of Christ.

The Solemnity of the Most Holy Body and Blood of the Lord (Corpus Christi) is the day set aside each year to reflect in a special way on the gift of the Eucharist. But, to use this celebration only as a time to focus our own individual engagement and devotion with the Christ who is present—body, blood, soul, and divinity—in the Eucharistic elements is to limit the scope of this Solemnity and the dynamic of the Eucharist itself.

The mystery of Transubstantiation is, as Fr. James T. O’Connor notes, “not one wherein the Lord descends from heavenly glory to "enter" under the appearances of bread and wine. Rather it is one in which he, not coming down, lifts the creaturely realities to himself, drawing them up to where he is now with the Father… By drawing the reality of all the elements scattered throughout the world unto and into himself, Jesus maintains his own bodily unity. The elements are changed into him, not he into them” (from