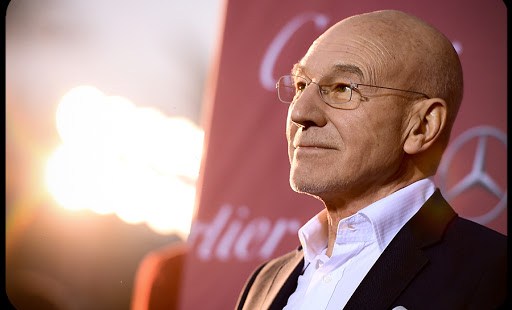 Star Trek: The Next Generation‘s Captain Jean-Luc Picard was known throughout the galaxy for his level head, fair mind, and diplomatic skill.  Last week, it became apparent he may have borrowed those traits from the actor who portrayed him, as Sir Patrick Stewart took on an issue far stickier than any interstellar debate Picard had to face.

Stewart ruffled feathers last Friday by telling a BBC news program that he supported the Christian owners of a Northern Ireland bakery in their fight against the UK government over gay-themed cake. Colin and Karen McArthur, owners of the Ashers Baking Company, were convicted last week of discrimination and ordered to pay a fine equivalent to US $765 for refusing to decorate a cake with the words "Support Gay Marriage" above an image of Bert and Ernie, two characters from the PBS children’s show Sesame Street.

Stewart, a longtime activist for LGBT acceptance and gay marriage, said that no matter how strongly he believes in a cause, he supports the rights of others to disagree.  He said the government’s attempt to force the bakers to decorate a cake with words that violate their deeply held beliefs was wrong.

“You’ve picked a deliciously difficult subject because, finally, I found myself on the side of the bakers,” Stewart told the BBC. “It was not because this was a gay couple that they objected. It was not because they were going to be celebrating some kind of marriage or agreement between them. It was the actual words on the cake that they objected to.  They found them offensive.”

“I would support their right to say ‘no, this is personally offensive to my beliefs and I will not do it,’" Stewart said, adding that, "I felt bad for them that it cost them 600 quid or whatever.”

The reaction from gay activists online and elsewhere was — to borrow a line from another Star Trek icon — "Fascinating."  Normally, the automatic response to a statement like Stewart’s is to personally attack the speaker as a bigoted homophobe.  But Stewart is constantly photographed with his gay best friend, and has been a vocal supporter of the fight to redefine marriage to include same-sex couples.  Clearly, he was not speaking from a place of hatred for homosexuals.

With their default ad hominem attack strategy taken away from them, LGBT activists were left to grapple with the content of Stewart’s words, rather than dig deep for any mud they could sling in his direction.  The result was a rather lukewarm chastisement that not surprisingly, made very little logical sense.  (Spock would surely not approve.)

While most of Stewart’s LGBT critics admitted that they themselves would not like to be forced to decorate a cake with an anti-gay marriage theme, when asked how they could oppose giving Christians the same freedom to refuse, they largely responded, "That’s different."  Gays, they argued, are a "protected class" and must be accomodated no matter what.  When reminded that religious believers are also a protected class, they said that that regardless of what the McArthurs believe, they’ve chosen to do business in the public square, and must check their beliefs at the door.

All of this is familiar territory.  In the US, the Supreme Court has sided with religious believers, ruling that closely held corporations can abide by the tenets of their owners’ belief systems.  In the case of the Northern Irish bakery, the UK courts have so far ruled differently (the McArthurs intend to appeal).  But what is unfamiliar, and refreshing, is the way Stewart was able to cut through the noise and make his words heard.  Overwhelmingly, even his opponents have been civil in their criticism.  What’s more, masses of people who might have otherwise been distracted from his message by the ad hominem approach were able to objectively evaluate his words — and found that they agreed with them.