The Catholic Church Wasn’t Always a Fan of Religious Liberty 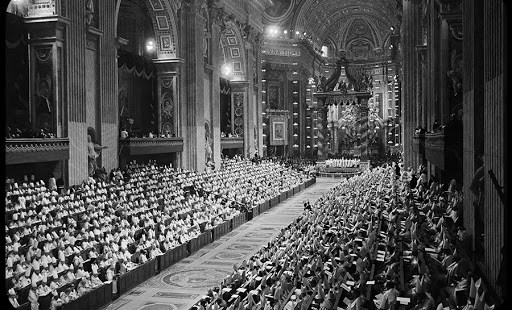 This coming December 7th, the Catholic Church will celebrate the 50th anniversary of the promulgation of Dignitatis Humanae, the Second Vatican Council’s Declaration on Religious Liberty.

Of all of the Council’s teachings, Dignitatis Humanae evoked the hottest debate and broke most sharply with the past.  A great enthusiast for the document, I recall sharing my interest with my Protestant grandmother: “Well, it was about time,” she shot back tartly.

Why indeed did the Catholic Church take so long to embrace a principle that Protestants had discovered three centuries earlier and that Enlightenment philosophers had proclaimed two centuries earlier?

The Enlightenment was part of the problem. While Rousseau and the Jacobins who launched the French Revolution pushed for religious freedom for the individual, they brooked no sympathy for the institutions of the Catholic Church — the purveyor of inquisitions and purges and a siphon of loyalties that should now be directed towards the state, as they saw it.  So, they forced Catholics to swear loyalty to a Church without the Pope, exiled and beheaded priests and nuns, and carried out what was perhaps the first modern genocide against Catholics in the Vendee region. Throughout the nineteenth and into the early twentieth century, liberal republican legatees of the Revolution continued to advocate for a state management of religion that curtailed the powers of the Church.

The Church’s slowness to come around to religious freedom was not mere reaction, though. Its ideal of Church-state relations continued to be that derived from the Middle Ages: a close partnership in which Church and state worked together to fashion a thoroughly Christian society. The Church would direct its members’ loyalty towards the state. The state would not only guard the privileges of the Church but would actively promote Catholic culture, customs, morals, and beliefs.  And, centuries after the heretic’s pyre and medieval torture chambers had disappeared, the Church still taught that it could, in principle, where possible, legally restrict non-Catholic expression of religious faith.  Even as late as the 1950’s, the Pope and top cardinals espoused this doctrine.

How did the Church go from this stance to its declaration that all people enjoy the human right of religious freedom?
First, Catholic intellectuals, including John Henry Newman, Jacques Maritain, Heinrich Rommen, and John Courtney Murray, did the hard intellectual work of laying the groundwork for a genuinely Catholic doctrine of religious liberty, one that explained why people and communities of every religion had the right to express and practice their faith, but that also was rooted in philosophical and theological commitments friendly to Catholic beliefs. Their ideas at once broke with medieval politics and avoided the pitfalls of Enlightenment individualism. The key was human dignity — the dignity of the human person as one who searches for and potentially embraces religious truth.

Second, in the West, regimes that were hostile to religious freedom eventually became liberal democracies friendly to religious freedom, thus convincing the Church that it could flourish and operate in a democratic context. This did not happen until the close of World War II. Indeed, upon closer inspection it turns out to be an anachronism to say that the rest of the world had arrived at religious freedom while the Church remained behind. The fascist and communist regimes that arose in the 1920s and 1930s were among the harshest deniers of religious freedom in the history of the world, while regimes like that of Mexico in the 1920s also suppressed religious freedom sharply.  Even Protestant rulers like Bismarck were imprisoning Jesuit priests in the late 19th century.  After World War II however, Britain, France, Germany, and Italy all sprouted liberal democratic constitutions with fairly robust religious freedom. Catholic statesmen like Robert Schuman, Alcide de Gasperi, and Konrad Adenauer served as great political leaders during this period.