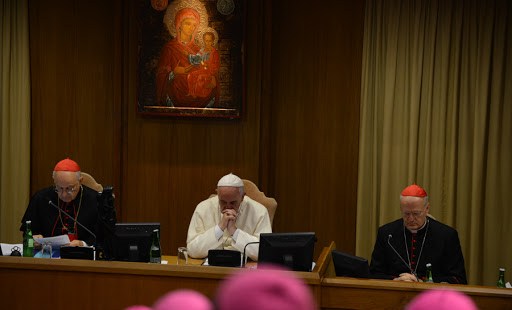 VATICAN CITY — Pope Francis has ratified the election of further members of the October 2015 Ordinary Synod on the Family. The Vatican published the list on Tuesday.

The list of 65 new synod members spans the five continents. It includes bishops elected by individual national episcopal conferences; bishops of the Catholic Churches of the Eastern rite sui iuris; and ten religious chosen from the Roman Union of Superiors General to represent the clerical religious institutes.

Belgian Bishop Johan Jozef Bonny of Antwerp, who has openly argued for Church recognition for same-sex unions and Holy Communion for the divorced and civilly remarried, is one of those ratified as a member of the Synod.

Last September, Bonny articulated his hopes for the upcoming Synod in a 22-page letter. In it, he disparages natural law, says the Church’s doctrine will have to be “dealt with” at the Synod if the Church wants “to open new avenues towards the evangelization of marriage and family in today’s society,” and effectively proposes dismantling Catholic culture by changing the Church’s language, which he calls “offensive” and in need of “urgent revision.”

In the same letter, Bonny states regarding same-sex unions: “The present day legalization of civil partnership and marriage between people of the same gender has led to new situations and insights concerning marriage and family life … In almost all the responses to Rome’s questionnaire [in preparation for the Synod], I have read the expectation that the Church would also recognize what is good and valuable in other forms of partnership, forms other than traditional marriage. I consider such a hope to be justified.”

Also of note: Africa will be well represented, with more members present than at last October’s meeting. To date, 40 Synod members from Africa have been ratified, not including South African Cardinal Wilfrid Napier, who serves as one of the Synod presidents; Guinean Cardinal Robert Sarah, Prefect of the Congregation of Divine Worship; and Ghanaian Cardinal Peter Turkson, President of the Pontifical Council for Justice and Peace, who will also be attending.

Last week, 45 presidents of the continent’s episcopal conferences and 5 cardinals, including Cardinal Robert Sarah, met in Accra, Ghana. They urged that the synod uphold the Church’s teaching on marriage and the family. Cardinal Sarah also called on the synod fathers “to speak with clarity and with just one voice, in filial love of the Church,” and expressed hope that the meeting would “protect the family from all the ideologies that want to destroy it, and therefore also from the national and international policies that impede the promotion of positive values.”

The list also contains substitute members who will replace a member only if he has a grave reason for not being able to attend, such as illness, responsibilities in the diocese, war, etc.

Individual national episcopal conferences elect members whose names are then sent to the Synod Secretariat. The names are then submitted to Holy Father. Technically, the results of the election in the bishops’ conferences are not to be made public until the names of those elected have been ratified by the Pope.

This is the third list of members to be published for the October synod. The first was published on