Pope Francis: Store Your Treasure in the ‘Handbag of Heaven’ 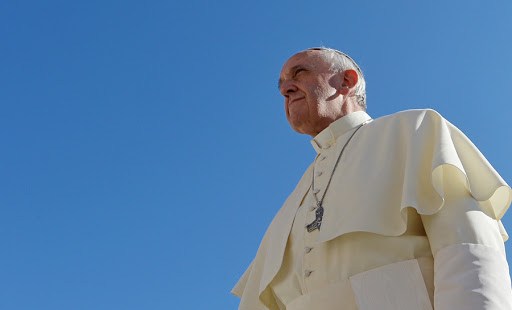 VATICAN CITY — Accumulating wealth for ourselves rather than to serve the common good is at the root of wars, family divisions, and the loss of one’s dignity, Pope Francis said on Friday, June 19, during his homily at morning Mass in the Chapel of Santa Marta.

Commenting on the day’s gospel reading from Matthew 6:19-23, in which Jesus warns his disciples not to lay up treasures on earth but in heaven, the Pope spoke of the many dangers posed by greed and human ambition.

Wealth, he said, “isn’t like a statue,” i.e., unmoving and with no impact on a person’s life. Rather, he said, “wealth has the tendency to grow, to move, and to take its place in the life and heart of man.” But if greed invades a man’s heart and becomes the driving force of his life, it will end up corrupting and enslaving him. What saves our hearts, he said, is using our wealth for the common good.

“In the end this wealth doesn’t give us lasting security. Instead, it tends to reduce your dignity. And this happens in families – so many divided families.  And this ambition that destroys and corrupts is also at the root of wars. There are so many wars in our world nowadays because of greed for power and wealth. We can think of the war in our own hearts. As the Lord said, ‘Be on your guard against avarice of any kind.’ Because greed moves forward, moves forward, moves forward…  it’s like a flight of steps, the door opens and then vanity comes in — believing ourselves to be important, believing ourselves to be powerful… and then in the end pride comes. And all the vices come from that, all of them. They are steps but the first step is avarice, the desire to accumulate wealth.”

Pope Francis conceded that it’s not easy for an administrator or politician to use resources for the common good and an honest one can be considered a saint.

“There’s one thing that is true, when the Lord blesses a person who has wealth, he makes him an administrator of those riches for the common good and for the benefit of everybody, not just for that person. And it’s not easy to become an honest administrator because there’s always that temptation of greed, of becoming important. Our world teaches you this and it takes us along that road. We must think about others and realize that what I own is for the benefit of others and nothing that I have now can be taken with me. But if I, as an administrator, use what the Lord gives me for the common good, this sanctifies me, it will make me a saint.

The ‘Handbag of Heaven’

The Pope said we often hear many excuses from people who spend their lives accumulating wealth but he stressed the only treasures we should be storing up are the ones that have value in ‘the handbag of Heaven.’

“It’s difficult, it’s like playing with fire! So many people calm their consciences by giving alms and they give what they have left over. This is not an administrator: the administrator's job is to take (what is needed) for himself or herself and whatever is left over is given to others, all of it. Administering wealth means a continual stripping away of our own interests and not believing that these riches will save us. It’s fine to accumulate riches, it’s fine to accumulate treasures but only those that have a value, let’s say, in ‘the handbag of Heaven.’ That’s where we should be storing them up!