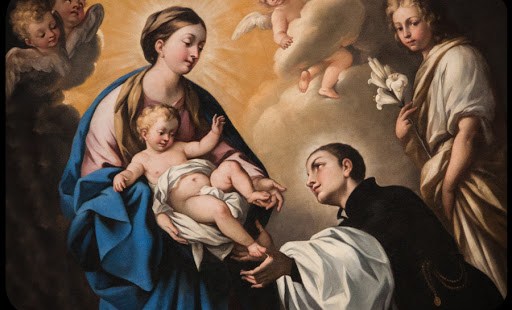 The pious Italian aristocrat, who was known for his extreme purity, gave up his rights to succession to join the priesthood. He died at 23, helping others during an outbreak of the plague.
Share
Print
Aleteia | Jun 19, 2015

This young saint of noble birth gave up everything including his life, for his faith

I first read about Aluigi Gonzaga when I was about 9 years old. Leafing through an old St. Joseph’s Daily Missal that I had found in my grandmother’s cedar chest, I saw page after page of saints’ names and the prayers assigned to various days of the year. When I turned to June 21, I came across an image of a Renaissance prince (wearing a ruffled collar, breeches, and hose) kneeling before a statue of Mary. Although the short bio that preceded the prayers of the Mass assigned for the day didn’t provide much information, something resonated within me. That was the moment when I began a relationship with the young man who is now honored as Saint Aloysius Gonzaga.

Today, when most people hear the name “Gonzaga” they think of the Jesuit University in Spokane, Washington. But, for Reformation-era Europeans, the name of Gonzaga meant something very different. They were distant relatives of the Holy Roman Emperors and counted among the greatest families of Italy, Spain, and all of Europe. The Gonzaga commanded respect. Military leaders, Marquises, Empresses, Queens, and no fewer than 14 bishops and 12 cardinals were counted among the members this great family. Aloysius, who was the eldest son of the Marquis of Castiglione (in Northern Italy) in 1568, received a birthright that would have been practically unrivaled in his day: he was set to inherit both his father’s vast holdings along with the titles, lands, and wealth of two other distant relatives, as well.

There was something special about this bright, talented, and, by all accounts, charming boy. Endowed with his family’s fiery temper, he channeled his energy into his studies and, most especially, into his faith. In time, however, his life began to spiral out of control as he faced a future that was not of his choosing—preparation to serve as the next Marquis of Castiglione and to take his place among the crowned princes of the Holy Roman Empire. People knew who he was and they sought his favor.

While illness took away some of his youthful vitality, it didn’t curb his spirit and, as a teenager, he began to focus on one reality: the God who was calling him to become more than he or his family ever imagined he might become.

All of this led him down a path that forced him to stand up to the conventions and norms of his day. After all, if he insisted on pursuing a religious vocation, he could very easily have taken his place among the prince-bishops and cardinals who were his relatives. But the young man discerned a different path. He wanted to become a member of a relatively new religious family within the Church—the Society of Jesus, which had been founded by Ignatius Loyola only a few generations before. This step, which his father opposed to the point of literally striking out at his son, would mean that he would have to leave behind his titles and inheritance to commit himself to poverty, strict obedience, and celibate chastity. He was willing to risk everything with no security but the promise of grace and the assurance that comes with faith.

He never looked back.

Although there is lots more that could be said, Aloysius never became the great teacher he promised to become and he never realized his dream of becoming a missionary in Asia. In fact, he never made his final vows as a Jesuit, nor was he ordained a priest. Aloysius Gonzaga died in the night between June 20 and 21, 1591, at the age of twenty-four. Many of his fellow Jesuits suspected that he contracted the illness that took his life when he picked up a dying man in the street and carried him to a Roman hospital, disregarding any danger to himself. After months of painful illness, he died surrounded by his brother Jesuits. This young man counted the royalty of Italy and Spain among his childhood companions, received his first Communion from Saint Charles Borromeo, the cardinal-archbishop of Milan, and had Saint Robert Bellarmine—now now honored as a Doctor of the Church—as his spiritual director. But, I believe that if you had asked Aloysius who he was, he would have told you that he was nothing more than a poor son of the Church and of his Holy Father Ignatius, the founder of the Society that Aloysius fought so desperately to join.