The Miraculous Hosts of Siena: The Body of Christ, Ever New 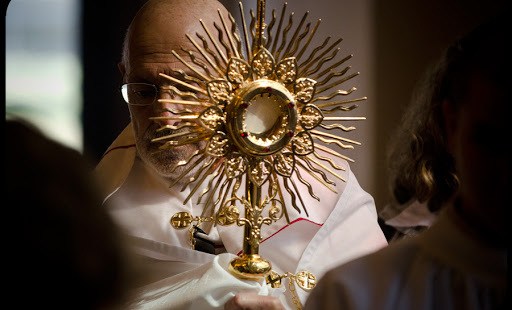 August 17 commemorates the theft, recovery, and continued integrity of these Consecrated Hosts

In the Basilica of San Francesco in Siena, Italy, 223 consecrated hosts have remained miraculously fresh and intact for nearly 300 years.

The miracle happened on 14 August 1730. The oldest written memory of the event was drafted the same year and signed by a certain Macchi. Thieves infiltrated the basilica, says the report,  and stole the tabernacle containing 351 consecrated wafers. Three days later, all 351 hosts appeared in the alms box of the sanctuary of St. Mary of Provenzano, where they had been taken. They were mixed with the accumulated dust in the bottom of the chest powder.

The people ran to commemorate the recovery of the holy wafers, which were carried back in procession to the Basilica of San Francisco. They were then dusted and venerated in reparation.

Over the years, the hosts showed no sign of corruption or decay. On April 14, 1780, the Superior General of the Franciscan Order, Father Carlo Vipera, consumed one of the hosts and found that was fresh and uncorrupted. As some of them had been distributed in previous years, the Superior then ordered the remaining 230 to be saved and enshrined, and never distributed.

Hoping to further test the inexplicable phenomenon, in 1789 the Archbishop of Siena, D. Tibério Borghese, kept some unconsecrated hosts in a box under similar conditions of the consecrated hosts. After ten years, a committee of scientists to study specially chosen case opened the box and found only worms and rotted fragments. Meanwhile, the consecrated hosts have maintained their integrity, against all physical and biological laws.

More to read: Eucharistic miracle of 2013 approved by Polish bishop after testing

In 1850 a similar test was made, with the same result: “The sacred articles are still fresh, intact, physically uncorrupted, chemically pure and show no beginning of corruption.”

Perhaps the most impressive verification took place in 1914, when Pope St. Pius X authorized a test that involved experts in food science, hygiene, chemistry and pharmaceuticals. The scientists concluded that the hosts were not prepared in any special way and had been stored in common conditions of humidity and light which should have caused them to deteriorate naturally. However, they were in such good condition and quite consumable, 184 years after their recovery.

Siro Grimaldi, a professor at the University of Siena and director of the Municipal Chemical Laboratory, was the chief scientist of the commission of 1914. He wrote a book with details precious about the miracle, entitled One scienziato Adora . In 1914 he declared that “grain flour is the best breeding ground for microorganisms, animal and plant pests, and lactic fermentation. Siena particles are in perfect condition, against the physical and chemical laws, despite all unfavorable conditions in which they were found and preserved.”

During a pastoral visit to the city of Siena, 14 September 1980, and John Paul said II of the prodigious hosts: “it’s the Presence.” Citizens of Siena perform numerous acts in honor of Holy Communion wafers . Among them, the homage of the Contradas, and the gift offered by the children making their First Communion, the solemn procession on the feast of Corpus Christi, and Eucharistic adoration on the 17th of each month, in memory of the recovery that took place on August 17, 1730.

Translated from the Spanish.