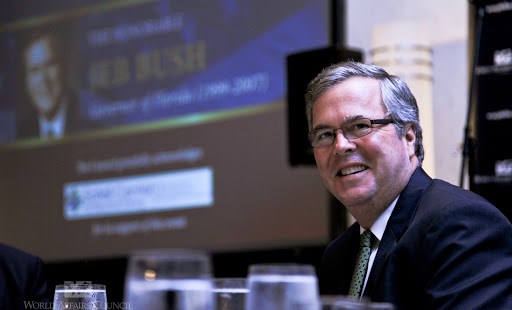 Former Florida Gov. Jeb Bush let a gathering of evangelical activists in on the journey he took in becoming a Catholic, and while he used terms that may not be common among Catholics, his reasons will no doubt find resonance with many others who have "swum the Tiber."

In his talk at the Faith and Freedom Coalition convention in Washington, DC, the Republican presidential candidate focused on following his wife into the Church and the "comfort" that his faith gives him.

“I converted to the Catholic Church—Christ came into my life a little earlier, but I converted to being Catholic in honor of my wife and because I believe in the blessed sacraments and they give me great comfort,” he said at the beginning of his speech. “On Easter Sabbath of 1995, I had lost an election in 1994 and found a total serenity and solace in the RCIA class, and converted to being a Catholic and it’s been an organizing part of my architecture, if you will, as a person and certainly as an elected official.”

Catholics normally refer to the Eucharist as the "Blessed Sacrament," but the other six simply as "sacraments," not "blessed sacraments." It’s not clear that "Easter Sabbath" refers to Easter itself, the Easter Vigil (Holy Saturday) or the Saturday after Easter (Easter Saturday), but many adults who come into the Church do so at the Easter Vigil Mass on the eve of Easter.

RCIA stands for Rite of Christian Initiation of Adults, the process by which those seeking to enter the Church prepare for Baptism and/or Confirmation and Eucharist.

Bush, the son and brother, respectively, of former presidents George H.W. Bush and George W. Bush told the gathering of falling in love "at first sight" with a 16-year-old Mexican girl, Columba Garnica de Gallo, when he was a 17-year-old exchange student near Leon, Mexico. The couple married four years later, and Bush was affected by his wife’s Catholicism.

To say that his Catholicism has been an "organizing part of my architecture" speaks to the question that he took up in the speech—whether a person’s religion can inform his decisions in public life.

"How strange in our time today to hear that our faith and our moral traditions spoken as some kind of a backwards or oppressive force when in fact it is really the moral foundation of our country, the greatest country on the face of the earth," he said. "It has also been, I think, in many ways, if we’re objective about this and take a step back, the greatest force for good in the world, the greatest force that has ever been known in the world. Feeding the hungry, healing the sick, welcoming the stranger, these are the tenets of our faith. If we act on our faith each and every day we’ll create a more just, a more loving world. The instinct to do these things didn’t come from nowhere. They came from our religious tradition. We must stand together to protect those freedoms that are so sacred and so important for a free society."

He said that as governor of Florida from 1999-2007, he "insisted that we build a culture of life, from beginning to end. It was one of the guiding principles… We took special care for the most vulnerable in our society because I do believe, I honestly believe, that as a conservative that believes in limited government, we need to put the most vulnerable in our society first… because they’re of value, they’re of, as much value as everybody else."

He said that he led efforts to pass a constitutional amendment requiring parental notice for abortions and to pass health and safety regulations on abortion clinics; signed into law a partial-birth abortion ban and a parental notification bill, and pushed for state funding for crisis pregnancy centers.