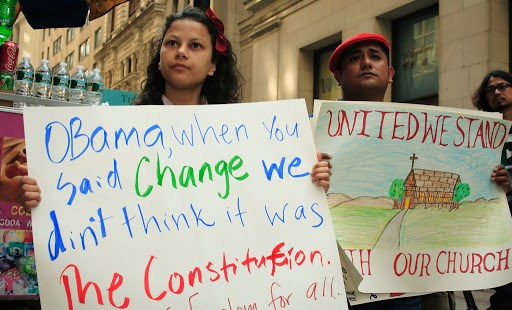 Archbishop William E. Lori of Baltimore is chairman of the US Bishops committee on religious freedom. He spoke with Aleteia Friday about the US Supreme Court decision in Obergefell v. Hodges, which ruled that the Constitution requires all states to issue marriage licenses to same-sex couples who apply for them.

Archbishop Lori spoke in the midst of the Church’s two-week long "Fortnight for Freedom," which was begun several years ago in light of laws and regulations posing an increasing threat to religious liberty in the United States.

What is your reaction to today’s Supreme Court ruling on same-sex marriage?
Back in 1973, the Supreme Court declared that the unborn child wasn’t a child. That didn’t change anything. When you view a sonogram, you see a child.

Same thing is true here: try as we might to redefine marriage, we’re not the authors of marriage—the Lord is. And so, the Supreme Court ruling might change a legal definition, but it does not change what marriage Is.

So we have to continue teaching that truth, with love and pastoral creativity, to new generations—the beauty and truth about marriage and family. We need to do this with an eye toward the current and future generations of children.


Have there been discussions among the bishops about new approaches to take? Opinion polls suggest that we’ve been failing, and the other side has been succeeding in get its message across through popular culture, the media, sit-coms, you name it.
The Church is always going to be outgunned and outspent, but all the outgunning and outspending in the world doesn’t fill the hole, that empty spot in the human heart—the desire to be loved infinitely by God. We have that going for us—it’s pretty big.

I think we are already looking at how we communication more effecively, especially with millennials, especially with families where there might be persons of a homosexual inclination among their members; how we use social media more effectively; how we tailor the Church’s message—not change it but tailor it in a way so as to win a hearing—sort of like what Paul did with the Athenians, some years ago.

But what I didn’t see acknowledged in the majority opinion is the right to free exercise, the right to conduct your ministries in the public square according to the Church’s teachng, the right to hire for mission, the right to provide benefits in accordance with our teaching, and the right not to be penalized or not have our programs accredited. I did’t really see that in there. I did see it reflected more in the minority opinions of Chief Justice Roberts and Justice Scalia.

Do you anticipate any legal moves on the part of anyone to demand that the Church and her ministers perform religious ceremonies for same-sex marriages?
I don’t know. That’s probably a stretch. I do think this ruling will create a lot of legal controversies. I’m not sure that’s one of them.

What do you see going forward?
I think if anything this should make us more determined to be on the one hand courageous, loving evangelists who proclaim the gospel of family, and on the other hand patriots who stand up for not only free speech but also for the free exercise of religion where the rights of every citizen are respected.