Pope Francis: Draw Near to Those Whom Society Excludes 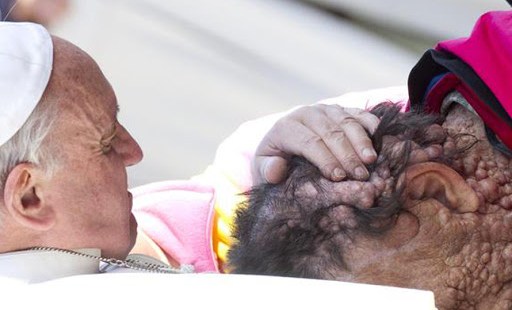 VATICAN CITY — Christians are called to draw near to those whom society tends to exclude, as Jesus did with the marginalized in his own day. This was the central message of Pope Francis’ homily during Holy Mass on Friday morning in the Chapel of Santa Marta, as he reflected on the day’s Gospel of Jesus healing the man with leprosy.

Pope Francis noted that the miracle, in St. Matthew’s Gospel, of Jesus touching and healing the leper takes place in front of the doctors of the law who considered the man to be ‘unclean.’ Leprosy, the Pope said, was like a life sentence, since curing a leper was thought to be as hard as raising someone from the dead. Lepers were excluded from society, yet Jesus stretches out his hand and shows us what it means to be close to such people.

We can’t be a community, we can’t make peace, and we can’t do good without being close to people, the Pope stressed. Jesus could have just said to the leper, ‘You are healed,’ but instead he reaches out his hand and touches him, becoming ‘unclean’ himself. This is the mystery of Jesus, the Pope continued, that he takes upon himself our uncleanliness, our sin, our exclusion to become close to us.

The Gospel passage also notes that Jesus asks the cured man not to tell anyone, but to show himself to the priest and ‘offer the gift that Moses prescribed’ in the law as proof for them. Pope Francis explained that Jesus not only gets his hands dirty but he also instructs the man to go to the priest so that he could be included in the Church and in society again. Jesus never excludes anyone, the Pope said, but rather he excludes himself in order to include us sinners.

Finally Pope Francis noted the reactions of the people around Jesus, many of whom are amazed at his words and follow him. Others, he said, watch from a distance with hardened hearts to criticize and condemn him, while others would like to draw close to Jesus but lack the courage to do so. To these people, Jesus holds out his hand, as he holds it out to all of us, taking on our sins to become one of us. Do we know how to draw near to people, the Pope asked? Do we have the strength and courage to reach out and touch those who are marginalized? This is a question that concerns us all — the Church, parishes, communities, consecrated, bishops,  priests, everyone.