Libertarians Are Not Our Friends 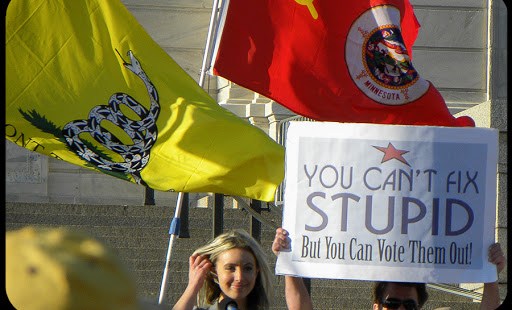 Conservative histories of post-war American conservatism all emphasize William F. Buckley’s ability to combine free marketers, traditionalists, and anti-communists into one movement. Though the writers may say that this “fusionism,” as it was called, was a political alliance against liberalism, they speak of it (as the word "fusion" suggests) as if it created a single thing, an integrated American Conservatism.

Conservatives still speak of the movement that way, with the free-marketers now called libertarians and the traditionalists social conservatives, all part of a fractious but unified movement. The movement seems to be coming apart, at least at the edges where the most ideologically committed live. And that is a good thing for Catholics and our political and cultural work, because it separates Catholicism from the libertarianism with which too many conservative Catholics have become politically entangled. (As we saw in the ideological reactions to Pope Francis’ Laudato Si’ I wrote about last week.)

Opponents of the ever-expanding state and advocates of the creative freedoms of the market, and rightly so, they don’t see the fundamental differences between Catholic social teaching and libertarianism. They think the differences to be merely differences of emphasis and ally themselves too firmly with people with radically different views of the individual, society, and the human good. Here I mean, let me emphasize, the mainstream, ideological libertarians, committed to individualism and secularism, not those who have a very high view of the market and what they call “spontaneous order,” which they apply to a more humane philosophy — and who really should call themselves something else.

Last week’s two major Supreme Court decisions, King v. Burwell and Obergefell v. Hodges, have helpfully made clearer the difference and the need for separation. Maybe now Catholics will begin to un-fuse themselves. Let me give three examples from the libertarian response.

First, the Federalist Society is one of the venerable institutions of the free-marketing, limited government right. On Monday they sent an email to people on the National Review mailing list inviting them to join. The main part read:

Right now, there is an unprecedented national conversation taking place. In the wake of
King v. Burwell, Americans from all walks of life—not just lawyers—are talking about the size and scope of government and if the ever-growing administrative state poses a threat to liberty and the rule of law. Do you want to be a voice for constitutionally limited government? Join the conversation. Become a member of the Federalist Society.

You will notice which decision the Society does not mention. The judicially-imposed redefinition of marriage apparently doesn’t bother them at all, though it would seem to be a greater threat to liberty even at the merely legal level, as it took from the states a political decision that properly belonged to them. The Society cares about the economic, not the moral decision.

Second, my colleague at Ethika Politika Chad Pecknold wrote a very good article for National Review titled "How the Redefinition of Marriage Serves Leviathan." One would think his argument for limited government would please libertarians, but the tweeted response from Jeffrey A. Tucker of Laissez Faire Books and the Ludwig von Mises Institute was (sorry for this) “effing brown shirts is what they are. there are no words. no words. I’m out.” By “they” he meant Chad and his peers (like me and probably you).

In Tucker’s first tweet, which had set off the string, he linked to