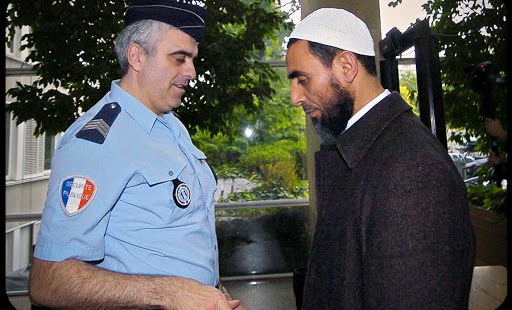 AP Photo/Patrick Gardin
Muslim cleric Abdelkader Bouziane, right, faces a policeman as he goes through security checks upon entering the Lyon courthouse, central France. Bouziane, the imam of the Venissieux Mosque in the Lyon suburbs, who declared in the monthly Lyon Mag magazine that he favors wife-beating, had been briefly deported to his native Algeria by French authorities the previous month. Since last month's deadly terror bombings in London, France has expelled two extremist Muslim prayer leaders and plans to ship home eight others.
Share
Print
John Burger | Jul 02, 2015

Ten of the deportations have taken place since January Paris attacks

Are some mosques brewing militant Islam and terrorism? France thinks so, and they are doing something about it.

Over the past three years, France has deported 40 foreign imams for "preaching hatred." A quarter of those have taken place since the January terror attacks in Paris, Interior Minister Bernard Cazeneuve said on Monday.

The minister vowed to clamp down on mosques and preachers inciting hatred after a suspected Islamist beheaded his boss during an attack on a gas factory last week, according to the Radio France International.

Any "foreign preacher of hate will be deported," said Cazeneuve, adding that several mosques were being investigated for inciting terrorism and if found to be doing so, "will be shut down."

Yassin Salhi, 35, on Sunday confessed during interrogation to killing his boss and pinning his head to a fence of the Air Products factory near the eastern city of Lyon.

The severed head was discovered flanked by two Islamic flags and it later emerged Salhi had sent a selfie of himself with the head to a number believed to belong to a French jihadist currently in Syria.

After the attack French Prime Minister Manuel Valls told French television, "We cannot lose this war because it’s fundamentally a war of civilization. It’s our society, our civilization that we are defending,"