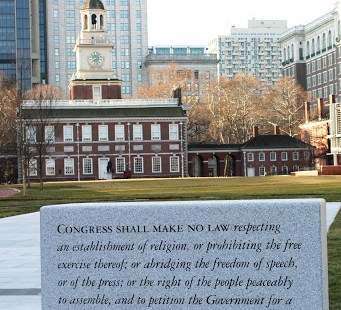 The majority of the Supreme Court thinks so

Whenever government assumes a greater role in a societal or cultural debate, expect both intended and unintended consequences.  The U.S. Supreme Court’s decision to make same-sex marriage a constitutional right under the Fourteenth Amendment will generate huge conflicts – in some cases unforeseen – with the First Amendment right to the free exercise of religion.

Until this constitutional showdown is ultimately decided, the campaign on the part of some same-sex marriage advocates to vigorously go after religious people and institutions that do not actively support same-sex marriage will intensify.  In their orthodox versions, none of the teachings of the three major faiths in the United States (Christianity, Judaism, and Islam) condone same-sex marriage, so there will be a myriad of legal challenges in lower courts against those institutions once same-sex couples are inevitably denied marriage vows by them.

The language of Justice Anthony Kennedy’s opinion elevates same-sex marriage to a civil right, meaning that a refusal to comply with the demand of same-sex couples to be married will likely subject a religious organization to penalties.  The most obvious is losing tax-exempt status, which means that a church, mosque, or synagogue would be forced to operate as a for-profit corporation subject to corporate tax laws.  This would cause the closing or reorganizing of religious institutions en masse, since many already operate on a bare-bones budget.

Justice Kennedy tried to reassure religious organizations by stating that “those who adhere to religious doctrines may continue to advocate with utmost, sincere conviction that, by divine precepts, same-sex marriage should not be condoned.”  However, the exact language in a court opinion is significant, and Kennedy’s use of the word “advocate” instead of “exercise” is revealing.

In his dissent, Chief Justice John Roberts flagged this judicial sleight of hand.  “The majority graciously suggests that religious believers may continue to ‘advocate’ and ‘teach’ their views of marriage,” he wrote.  “The First Amendment, however, guarantees the freedom to ‘exercise’ religion.  Ominously, that is not a word the majority uses.”

Justice Kennedy could have included a sentence that carved out an exemption to the law for religious institutions or people acting according to their conscience and the teachings of their faith but he chose not to.  This indicates that he and the other four justices in the majority believe that the implied right to same-sex marriage in the Fourteenth Amendment trumps the explicit right to the free exercise of religion in the First Amendment.

During oral arguments of the Obergefell v. Hodges case, Solicitor General Donald Verrilli (the government lawyer arguing in support of same-sex marriage) admitted that the tax-exempt status of a non-compliant religious organization would be open to review.  He candidly replied to a direct question about this by Justice Samuel Alito by saying, “It’s certainly going to be an issue… I don’t deny that… it is going to be an issue.”

This sentiment has already been echoed by many in the media as numerous outlets immediately began calling for stripping tax-exempt status from religious organizations.  New York Times columnist Mark Oppenheimer, writing for Time Magazine, said “… for organizations that dissent from settled public policy on matters of race or sexuality, we need to take a more radical step.  It’s time to abolish, or greatly diminish, their tax-exempt statuses.”

While many are quick to assure that this is not the end goal, government action on both the local and national levels says otherwise.

The Obama administration issued a compliance mandate to The Little Sisters of the Poor, an order of Roman Catholic nuns, for refusing to allow contraception coverage in their insurance plans as required by Obamacare.  The Little Sisters are fighting back by filing suit, claiming that this requirement violates their conscience and their free exercise of religion.  The Obama administration rejected their free exercise claim and continues its fight against them.  Investor’s Business Daily estimates that if the Little Sisters lose their case against the government they will either have to violate their conscience and provide contraception coverage or be fined around $2.5 million (about 40 percent of their annual budget).