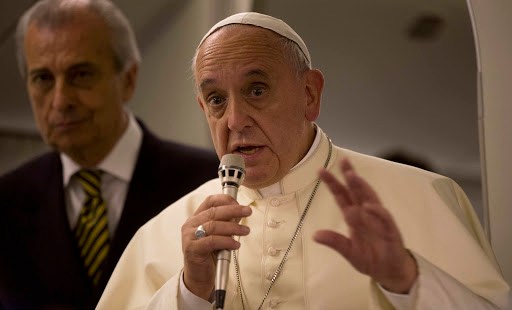 AFP PHOTO/POOL/ANDREW MEDICHINI
IN FLIGHT : Pope Francis talks to journalists during a press conference he held aboard the papal flight on his way back to Rome at the end of a three day trip to the Midle East, on May 26, 2014. Pope Francis praised the "courage" of Israeli President Shimon Peres and Palestinian leader Mahmud Abbas after both agreed to come to the Vatican to pray with him for peace. Abbas and Peres "have the courage to move forward", Francis told reporters on his return flight from a three-day trip to the Middle East that was packed with powerful symbolism but with politics never far behind. AFP PHOTO/POOL/ANDREW MEDICHINI
Share
Print
Vatican Radio - published on 07/13/15

Pope praises parents for their openness to life

VATICAN CITY — Pope Francis arrived back in Rome today at the end of his week-long pastoral visit to Ecuador, Bolivia and Paraguay. During the return flight the Pope held a traditional press conference with journalists on board, speaking of his experiences in Latin America and his plans as he looks ahead to his next trip to Cuba and the US in September.

As often happens, the in-flight papal press conference en route from Asunciòn to Rome, was both a synthesis of the trip to Latin America as a whole — and an insight into the mind and heart of Pope Francis.

Looking back over the 8-day visit to Ecuador, Bolivia and Paraguay, journalists asked the Pope to summarize his “message” to the Latin American Church. He did so by recalling the thing that struck him most in all three countries: the children. “I’ve never seen so many kids,” he said. “This is a Church of life … I wanted to encourage this young Church…which I believe can teach us a lot.”

Another question regarded Pope Francis’ support for popular movements, as opposed to the business world. He replied saying that his message is the same to both: a message that comes straight out of the Church’s social doctrine and which he simply applies to specific situation. “It’s catechism,” he said.

Looking ahead to the visit to the United States and Cuba this September, Pope Francis was asked how he is dealing with a perception by some in the U.S. that he is critical of American economic systems. “Every criticism must be received, studied and then talked through,” he replied. “If I don’t dialogue with those who criticize then I have no right to express an opinion.” He admitted that, in preparation for the visit, he now needs to begin studying these criticisms in order to prepare to dialogue.

The Pope also gave new details about the process that led to the Vatican mediation between the U.S. and Cuba, concluding that it was the result of “the goodwill of the two countries and the merit is theirs.”

Finally, while recognizing Pope Francis as a champion of the poor, one journalist asked him why he doesn’t also defend the middle class. The Pope thanked him for the observation, acknowledging that “polarization” is causing the middle class to shrink. He also promised “dig deeper into the Church’s teaching” in this regard.