“Minions” – Crude, But a Good Time in the Theater 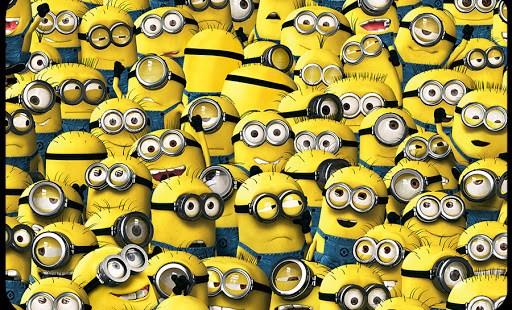 Although Minions is definitely the weakest film in the Despicable Me franchise, it’s a perfectly fine motion picture to take your child to… especially if they’re over 30 years old.

This isn’t due to the risqué content in the film (we’ll get to that in a minute), but more because of the fact that a large number of jokes in the movie require an intimate knowledge of the late 1960s/early 70s. Maybe your own children will get the references to Richard Nixon’s Watergate scandal or the ongoing conspiracy theory that Stanly Kubrick helped fake the moon landing, but in my theater, there were definitely moments when the little ones in the audience sat staring silently at the screen while some of the old fogeys in attendance chuckled.

Other than that, though, the kiddies should enjoy the movie just fine. It’s chock full of the manic minion behavior and ludicrous super-villains we’ve come to expect from a Despicable Me movie. It’s also full of butts. If you’ve read any other Catholic reviews of the movie, then you’re probably aware there are scenes in which a minion wears a thong, an enormous sumo’s posterior fills the frame, and a trio of palace guards are hypnotized into stripping down to their briefs and engaging in a bit of twerking. Minions is sort of a mini-buttapalooza.

Now this overabundance of booty has offended some Catholic reviewers out there because they feel it sexualizes a film marketed towards children, and that’s fine. Personally, it didn’t bother me all that much for two reasons. One is simply that most bare bottoms are funny rather than sexy, especially to children. I suspect this is because they know that this is where poots come from, and poots will always be hilarious to children no matter how much they make defenders of the fine arts cringe. Heck, they may find them funny because they make defenders of the fine arts cringe. By extension, the object that produces said poots will always garner a giggle from kids. It’s as unavoidable as death and taxes.

The second reason is that there is actually something far more blatantly sexualized in the film that I found more offensive than a few bare butt cheeks. During a montage in which the three main minions are given the run of Buckingham Palace, one of them hops in a hot tub with two fire hydrants and nuzzles up against them. Now, the audience already knows from an earlier scene that this particular minion has mistaken England’s yellow hydrants as members of the opposite sex. In effect then, what we’re given is a scene in which a minion is having a hot tub hook-up with two hydrants. For my tastes, it would have been much more clever and funny to see the minion wooing a hydrant, treating her to a romantic dinner, and maybe taking in a movie. Plenty of room for parody there. Instead, they went for a cheap sex joke in a kid’s movie. This is why Universal is not and never will be Pixar.

There have also been some rumblings that the movie contains no redemptive storyline such as the one Gru went through in the first two chapters, which, if you take Minions as a standalone film, is a valid criticism. The thing is, it’s not really a standalone film. What Minions does is fill in the backstory of where Gru’s little yellow spuds came from. Apparently, they originated at the dawn of time as single-celled organisms with an ingrained desire to follow something greater than themselves. This tendency caused the minions to attach themselves to the biggest, baddest being they could find. Over the course of time, they blundered their way through a series of masters until finally (mild spoilers) they meet up with a young Gru at the end of this latest installment.