Love Unclouded by a Rainbow Filter 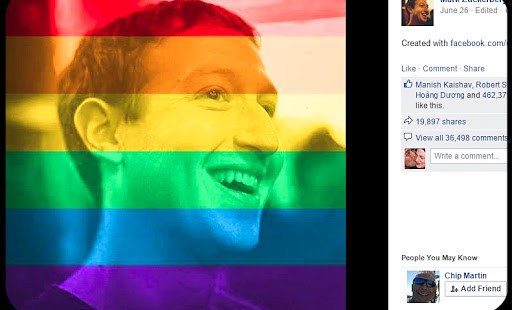 “If your eye is clear, your whole body will be full of light”

It’s been a few weeks since the Supreme Court issued its vote that made same-sex “marriage” legal in all fifty states. Since that decision, social media has been taken over by a rainbow filter, especially on Facebook as millions of people have adjusted their profile picture to be shown under an assembly of horizontally-striped colors in support of the Supreme Court’s decision.

I am personally troubled by how many of my Christian friends—especially my Christian friends who believe marriage was created by God to be between one man and one woman for life—have adopted this rainbow filter. I’ve seen several reasons tossed around: support for equal rights, support for equal recognition under the law, etc. But every rationalization ultimately can be grouped under the catch-all umbrella phrase: “Separation of Church and State.”

The reasoning, for these Christian friends of mine, is this: There is a separation between Church and State in this great country, so it’s totally acceptable to support same-sex couples being afforded the privilege of legally recognized marriages.

What troubles me about this is that it comes off as celebration. They don’t just appear to be “supporting” something political—they appear to be celebrating something culturally, well, destructive, and objectively sinful.

I would like to suggest this as food for thought: We pride ourselves, as Americans, for the separation of church and state. It is in place for good reason, and the protections it guarantees are important. However, there is another important separation I would like to remind us all of.

When Jesus was praying in the garden before his passion and death, he prayed that we might be “in the world, and not of it.” Jesus was a perfect example of this. He met people where they were, brought them a message of hope and peace, healed their diseases and forgave their sins. He supported all people in every sense of the word, and showed a profound respect for their dignity.

But one thing Jesus never, ever did . . . was celebrate sin.

As a same-sex attracted person (who is not ashamed of my attractions), I would like to offer a challenge to those Christians who think they are loving me by filtering their profile picture through a rainbow flag:

The love of Jesus wasn’t afraid to get dirty, to get bloody, to die to self. It wasn’t afraid to offend, though offense was never its goal. The love of Jesus is authentic, appreciating persons for who they are (and who we are is not defined by who we are attracted to), and supporting them in a journey of developing an ever-deeper relationship with God, others, and the self.

Jesus would not have had a rainbow-filtered profile picture. That kind of “love” is too cheap and easy for Him. He didn’t avoid hard questions or hard circumstances. He gave hope, joy, peace, healing, and ultimately His life, to show us our worth.

I beg of you, brothers and sisters, to be in the world and not of it. Love more authentically than through a rainbow filter. Let love really win. Bring the Gospel to a dying and hurting world rather than celebrating its spiral into sin. Forget the politics and buzzwords for a few moments, and consider the impact of celebrating persons made in the image of God, and refusing to ever celebrate their stepping aside from that image.

Please don’t celebrate sin. Celebrate love, namely, by showing it, really, for what it really is.

"Emily" is the penname of a 23-year-old Theology student who spends her free time reading, writing, hanging out with friends, and dyeing her hair ridiculous colors. When she isn’t doing homework, she’s assisting with the youth ministry program at her parish.

This article first appeared at The Chastity Project.  It is reprinted here with kind permission.