If the press coverage was your only glimpse into last week’s ESPY Awards, you probably came away with the impression that there was only one noteworthy story.

In reality, the show was chock full of inspirational moments. World-renowned athletes from across the sporting spectrum took to the stage, talking about the importance of leaving it all out on the field, inspiring greatness, and never giving up.

But one athlete’s testimony gave a whole new meaning to fortitude. Lebron James introduced Cincinnati Bengals lineman Devon Still and his 5-year-old daughter Leah, who has been battling stage 4 neuroblastoma since her diagnosis last year. It’s a form of cancer that most frequently affects children Leah’s age or younger. “I dare you not to be inspired,” James said. 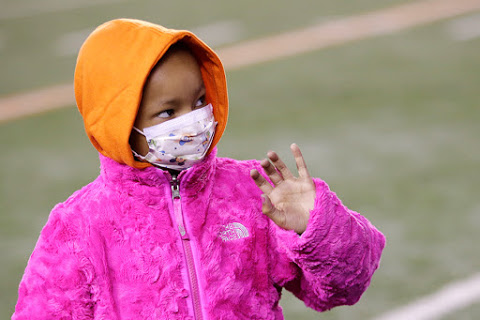 A brief video then told the story of Still and his daughter. After the unexpected diagnosis, he put his thriving NFL career on hold to support his daughter in her time of need, and to walk with her every step of the way. He slept by her bedside on a cot in the hospital (despite a recent back surgery). He shaved his head bald, announcing that he would only let it grow when hers grew back too. He sat with her and kept her spirits up through three weeks of intensive chemotherapy. She clearly needed his steady presence just as much as he needed her bright spirit – and together, the two of them fought to “beat up cancer,” with Cincinnati fans and organization behind them the whole way.

Still then took to the stage to receive the Jimmy V Award for Perseverance. In a long, candid, and poignant speech, he talked about the frustration and helplessness he felt right after the diagnosis (“I felt like I was in a nightmare…I would go down to the chapel and I would just cry”); the strength he received from God (“that was a sign from God that he was answering all my prayers”); and the bends in the road where he felt his weaknesses threatening to overcome him (“who was I to go try and find an escape through liquor, and she had no escape for her pain?”).