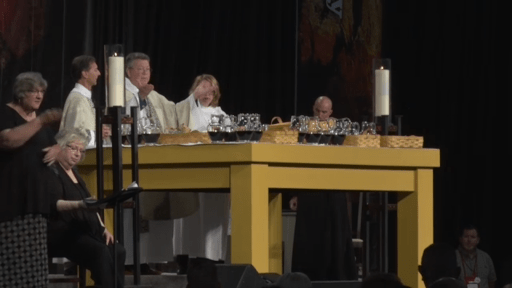 “God did not intend to do something new,” North Dakota prelate states

A bishop in the American Episcopal Church is bucking his faith community’s embrace of same-sex “marriage.”

Bishop Michael G. Smith, leader of the flock in North Dakota, said he plans to resist his Church’s new policy on allowing marriages of two men or two women in its churches.

At its general convention in Utah, the U.S. Episcopal Church voted July 1 to rewrite the liturgy to allow such nuptials, changing the phrase “husband and wife” to “the couple,” for example. Smith was one of only a few bishops who voted against the change, citing the catechism, which says: "Holy Matrimony is Christian Marriage in which the woman and man enter into a life-long union."

The bishop said in a church newsletter Monday that he remains "unconvinced that God is doing something new by altering the order established in creation.”

“Therefore, I cannot in good conscience authorize the use of these trial liturgies for the Diocese of North Dakota" when the policy takes effect Nov. 29, the beginning of the season of Advent.

The Forum of Fargo-Moorhead reported that Smith will meet with clergy in the North Dakota diocese to figure out how to comply with the new requirement:

Some of the possible solutions, he said, include asking clergy from a neighboring diocese to officiate any same-sex marriages.

The policy allows clergy to decline to preside at a same-sex wedding.

Smith has a soul-mate in the Roman Catholic Bishop of Fargo, John T. Folda, who wrote in the wake of the US Supreme Court’s Obergefell v. Hodges decision that forced same-sex “marriage” on all 50 states, “With little regard for the common understanding of marriage that predates any government or court, five justices imposed a new understanding of marriage that ignores what is inscribed in human nature by God himself,” Bishop Folda wrote.

North Dakota’s ban on same-sex marriage, which was approved by 73 percent of voters in 2004, remains in the state constitution unless voters decide to repeal it, either through a ballot measure brought by the state Legislature or a citizen-initiated ballot measure, The Jamestown Sun reported. But because of Obergefell, it has no force and effect.