A Blessing to One Another: Pope John Paul II and the Jewish People 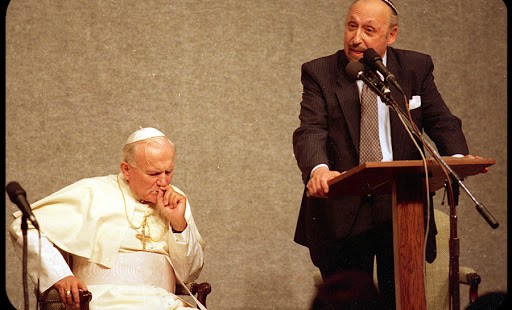 AP File
While visiting the U.S., Pope John Paul II listens to Rabbi Mordecai Waxman, former head of the Synagogue Council of America, on September 11, 1987 in Miami, Fla., during a meeting with Jewish leaders
Share
Print
Aleteia - published on 07/28/15

VATICAN CITY — A new exhibit illustrating Pope St. John Paul II’s efforts to improve Catholic-Jewish relations opened on Tuesday in the Vatican’s Charlemagne Wing and will run from July 29 to September 17, after touring several US state capitals, where it received more than one million visitors.

The exhibit, entitled “A blessing to one another: John Paul II and the Jewish People,” was presented as a gift to John Paul II for his 85th birthday, and was inaugurated at the Xavier University of Cincinnati, Ohio, on May 18, 2005, just one month after the Pope’s death. It then arrived in Rome, and while in Europe its organizers wanted it to visit Krakow, the Polish city where Karol Wojtyla was archbishop.

“A blessing to one another” describes the steps the pontiff took to improve the relationship between the Catholic Church and the Jewish people, and reflects the continuing relevance of the conciliar declaration Nostra Aetate, issued 50 years ago, in which the Catholic Church expresses her appreciation for other religions and reaffirms the principals of universal fraternity, love and non-discrimination.

Funded by various universities and private individuals and bodies who see interreligious dialogue as a source of progress for humanity, the exhibition narrates John Paul II’s relations with those whom he defined during his historic visit to the synagogue of Rome on April 13,1986 as “our elder brothers.” It is divided into four sections and consists of photographs, videos, recordings and other interactive sources.

The first section illustrates Karol Wojtyla’s early years in his birthplace Wadowice, what would become a lifelong friendship with the young Jew Jerzy Kluger, and the relations between Catholics and Jews in Poland during the decade 1920 to 1930.

The second section is dedicated to the Pope’s university years in Krakow, and his work not far from his friends in the Ghetto who knew the horrors of the Shoah.

The third describes his priestly and episcopal life, Vatican Council II and the change of direction it represented in relations between Jews and Christians, and the close link between the cardinal archbishop of Krakow and the Jewish community in his archdiocese.

The final section considers the figure of Wojtyla as the Successor of Peter, his visit to the Synagogue of Rome, and his trip to Israel in the year 2000 when he left a prayer in the Western Wall asking for divine forgiveness for the treatment that Jews had received in the past and reaffirming the Church’s commitment to a path of fraternal continuity with the People of the Covenant.

Visitors to “A blessing to one another” are invited to write a prayer to be placed in a reproduction of the Wall. They will be gathered and deposited in the Western Wall without being read.