How to Know if You’re Over-Parenting 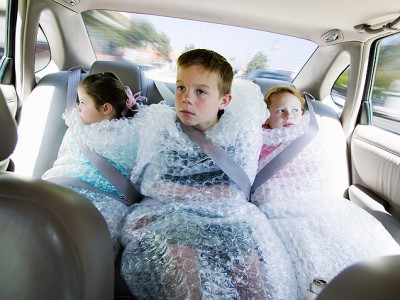 If you’re doing these things, it might be time to land the helicopter.

Last week, when talking to my fiancé’s sister-in-law about having kids, she made an interesting point: the biggest change is not necessarily that you now have a child, but all the worry that comes with it. How true does that ring?! I sometimes feel annoyed by mothers that seem to keep their baby all to themselves when all they are doing, perhaps subconsciously, is protecting their child as they know how.

Which leads me to the topic of over-parenting: because yup, parents, it’s a thing – at least according to a recent stuff.co.nz article. And I’d have to agree! Like most things, parents wouldn’t even be aware that they’re doing it. But, also like most things, parenting should beware of extremes and strive for a healthy balance between guiding kids and allowing them to flourish freely.

According to the article, mums and dads fall into over-parenting because of fear (and really, most bad decisions come from a place of fear). As put by Dr. Wendy Mogel, clinical psychologist and author: "Parents today are either afraid for their children or afraid of their children." Dr. Wendy has 10 signs of over-parenting and tips to work through them, and I’m going to share a few of them here:

You find it hard to say "no"

Those toys at the supermarket, that McDonalds run on the way home, they want to eat dinner now instead of later… I think a lot of parents find it hard to say “no” to these things. Sometimes it’s because it’s easier to just give in, but I think it stems mostly from not wanting their kids to experience any emotions like negative emotions. Yes, these emotions aren’t fun, but we all need to learn how to deal with them in a healthy manner. Imagine if you were protected from them all your childhood and then got hit with the real world? That would be way less fun!

You do everything for your child

Feeding them, carrying their school bag, cleaning up after them all the time – let’s just say they aren’t developing any good habits this way. My mum got us doing our own laundry when we reached a certain age, we make our own beds and clean our own rooms, and we dressed ourselves pretty much as soon as we could. We didn’t always get it perfectly right (yup, I’m talking pink-tinged loads of laundry), but that’s how we learnt. I might have grumbled about these things when I was younger, but now I’m glad I know how to do them!

You let your child quit quickly

So music lessons require practice, netball games means waking up early on Saturdays, and it’s taking them more than two minutes to construct a sentence with that spelling word in it. Doesn’t mean you should do it for them or let them off the hook – all that will lead to is a lazy kid who only knows how to give up when the going gets tough. Of course there will be times when they have to step away from something, but generally hard work and perseverance are virtues worth growing in!

Whether it’s coming down hard on them for not scoring any goals or asking what happened to the other two per cent when they scored 98 per cent, it’s not fair or realistic to expect your child to be perfect. While the end result is pushing your child in an unhealthy manner, there are a few reasons it could be happening. For one, you could be focusing too much on the product rather than the process – while really, you should be teaching them that as long as they’re doing their best, you’re proud of them. The other cause could be that you’re comparing them to other kids or looking to their achievements as a sense of your own worth; and we all know this is detrimental. Each child is unique – they deserve to be loved unconditionally and encouraged to do their personal best.

Check out more signs of over-parenting and helpful tips from Dr. Wendy here.

Tamara Rajakariar lives in Australia and is a Journalism graduate from the University of Technology, Sydney. She worked for Sky News in Sydney for a year before taking some time off to travel. She currently works as an online sub-editor for MercatorNet.

This article first appeared at MercatorNet.  It is reprinted here with kind permission.