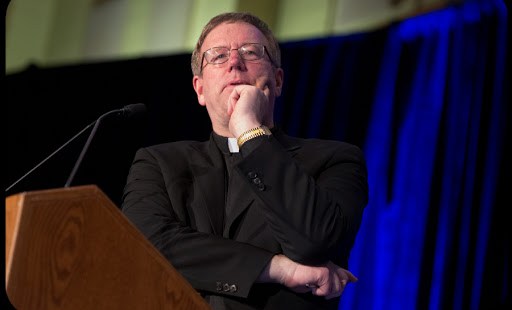 Fr. Robert Barron draws on the giants of Catholic theology

In his spiritual autobiography The Seven Storey Mountain, Thomas Merton recounts a pivotal experience he had while attending Columbia University in New York City in 1937. The young student – like many of his generation, a connoisseur of jazz, drinks, and the fast life – was wandering down Fifth Avenue when he picked up Etienne Gilson’s The Spirit of Medieval Philosophy from a bookstore.

Flipping through that book on the Long Island railroad would change the course of Merton’s life forever. “I had simply taken for granted that the God in whom religious people believed…was a noisy and dramatic and passionate character,” he wrote – a “vague and rather superstitious hangover from an unscientific age.” But Gilson introduced to him an “entirely new concept of God”, one that “transcends all our conceptions”: a God that was not some bearded being hovering beyond the sky, but ipsum esse subsistens – the act of Being Itself – here and now giving rise to everything that is, from the smallest grain of sand to the largest galaxy.

“I think the reason why these statements, and others like them, made such a profound impression on me, lay deep in my own soul,” Merton wrote. “And it was this: I had never had an adequate notion of what Christians meant by God.”

The problem is a familiar one to Fr. Robert Barron, the YouTube evangelist and recently elected auxiliary bishop of Los Angeles. What is (and what isn't) the 'God' of Christianity? How do we know? Arguments about God’s existence and non-existence all seem to hinge on a more critical question: namely, what is it we’re all talking about when we talk about God?

This recurring theme of Fr. Barron’s ministry has culminated in a six-part video series titled “The Mystery of God: Who God Is and Why He Matters,” which puts the enigma of the meaning of “God” front and center.


The first talk, “Atheism and What We Mean By ‘God’," is a longer, more polished video in keeping with Word on Fire’s minimalist aesthetic. With typically deft and sweeping insights, Fr. Barron brings us from Christopher Hitchens back to the great giants of modern unbelief, most notably Feuerbach. The upshot is this: when any of these atheists recasts God as the ruler of a kind of “celestial dictatorship,” scaling back human freedom or demanding credit for this or that natural process, they pivot on a “Yeti theory of God,” which thinks of God as a kind of supreme being that’s either “out there” in the universe or not.

You can hardly blame them. Christians everywhere loudly profess the God atheists are busy deconstructing. But there is a lively classical alternative to this false dilemma, one that continues to revolutionize the way people approach the question to begin with. Drawing on Augustine, Aquinas, and other giants of Catholic theology, Fr. Barron returns to the notion that flipped a switch in Merton’s mind all those years ago: ipsum esse, the infinite wellspring of the universe that, to borrow from Gilson, lies “beyond all sensible images, and all conceptual determinations… the absolute act of being in its pure actuality.”

That wellspring is not a problem for us to solve, but a mystery in which “we live and move and have our being.” This can be unsettling terrain. It forces us to turn in every safe and comfortable image of God our mind is used to concocting, and venture out into deeper, colder waters where we lose all oversight and control. At the same time, it forces us to see our every breath and action as treading the water of this “ocean.” God becomes something both more distant and more intimate than we ever imagined, something we can never fully understand nor avoid.

But in a culture used to talking about God like one questionnaire line among many, this has all the exhilaration of a new discovery. It frees up God to be what he is: not a being in competition with human freedom or the natural sciences, but that “Being” whose very nature is to give rise to – not get in the way of – the spectacle of existence. The logic of the Incarnation – the scandalous idea that this ipsum esse became a human being in a particular place and time – builds on this line of thought, and only deepens and enriches the mystery.

If all of that sounds a little strange…it’s supposed to. “God is strange,” Fr. Barron concedes. “And I don’t mean that in a sort of cavalier way. I mean that almost as a technical description.”