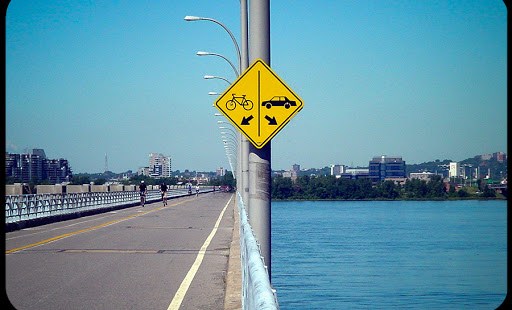 Near misses and miraculous escapes along the perilous road of life

“You guys think you are missing the signs?”

Our beloved family physician had just examined a recent bike injury on our oldest son, and echoed a sentiment that we had heard (or sensed) from multiple family and friends. Zach received eight stitches on Mother’s Day, courtesy of handlebars thrust into his lower midsection after hitting a hole near the driveway. But as our 7-year-old Matthew matter-of-factly stated on the way to the afterhour’s clinic, while Zach was bemoaning the possibility of getting stitches, “At least it isn’t like Jesus being crucified on the cross.”

The story began over five years ago on a leisurely Father’s Day morning in 2010.  As I detailed in my first book, Into the Rising Sun, we had gone down to a bike path by the river for a leisurely family ride. The next day, on her fourth birthday, Emma woke up in Cincinnati Children’s Hospital with seven titanium plates in her forehead that had been used to piece together her fractured, two centimeter depressed skull. Four days later, we left the hospital together.  A few minutes after I started writing this, our beautiful, vibrant, sweet little girl just said goodnight as she and her siblings readied for another year at school.

Exactly one year after Emma’s accident, as I was training for the Louisville Ironman, I strangely forgot about the previous night’s plan to bike down to the river and engage in quiet prayer where she had gone down. I found myself out on a county road early in the morning, joined as I often was by my white-tailed friends. But as I approached a small bridge and a car came closer from the opposite way, the inexplicable happened. Out one jumped in front of the car. The driver had no time to swerve, and hit the deer. It levitated and came flying towards me. Instinctively, I ducked down low on my aerobars, pushed on my pedals, and the deer sailed over me, landing with a thud on the bridge I had just passed over.  I should have been deathly afraid. But all I felt was His presence, and suddenly the reminder of a year ago flashed in my mind midst a deep surge of gratitude.  I rode strong that day, and haven’t stopped since.

Two years later, I was on my way to my parents to pick up a car for a romantic trip to Key West and Dry Tortugas National Park with Amy.  I was chastising myself.  That morning, I had forgotten to put my helmet on as I always do for my bike commute (and other rides), and didn’t realize it until I was almost to work.  A rain shower rolled in that afternoon and I felt uneasy without the helmet even though I had biked in the rain for years.  Just as the drops slowed to sprinkle, I approached a treacherous forty-five degree railroad tracks a little too fast.  Before I knew it, I found myself sliding sideways on the concrete, head included.  I stood up, only to be face-to-face with my first cousin.  For various reasons, she had changed her route and time departure from work, apparently so she could pick me and my bike up and take me home.  Less than forty eight hours later, despite a severely swollen (but not broken hand) and some road rash, Amy and I kayaked the six mile round trip to Loggerhead Key (the easternmost island in the park) on a stunningly calm, beautiful day in the green waters of the Caribbean.

Less than three weeks ago, a couple of months after the Mother’s Day incident, Amy and my sister were training for a half Ironman (1.2 mile swim, 56 mile bike, 13.1 mile run) on the third day of a weeklong vacation in Amelia Island, Florida.  Along with a swarm of other bikers on A1A Avenue, they were enjoying the warm, sunny day.  That is, until a middle-aged woman hit both of them from behind, throwing my sister into the grass shoulder (who fortunately was unhurt) and causing Amy’s bike to flip sideways, sending her careening into the pavement.  Two broken ribs and small pneumothorax later, we were treated to an overnight stay at the hospital while the rest of the family took care of our six kids at the vacation home.  The authorities are still looking for the driver.  But on the first day of August, despite much consternation and uncertainty (although with the clearance of our family physician and a pulmonologist friend), Amy and Laura crossed the finish line of the local half Ironman.  Amy’s ride was a modified one, done safely at the transition zone on a trainer.  But as she surged to the finish line on the run with two broken ribs, no one could have ever imagined where she had been less than three weeks before.

Meanwhile, as all this has transpired, we live in a place where obesity is on the verge of overtaking smoking as the number one contributor to fatalities.  Heart disease, cancer, and chronic lower respiratory diseases remain the three leading causes of death. Americans average five hours of television per day.  Adult bookstores outnumber McDonald’s restaurants three to one (Kimmel, 2008).  When factoring in multi-tasking, youth ages 8-18 are exposed to over ten hours of media/technology per day.  Divorce remains steady at well over 50 percent of marriages while single parent and unmarried families continue to grow.  Approximately 93 percent of prisoners in the U.S., which leads the world in this category, are male.  32,719 people died in the U.S. in traffic accidents in 2013.  There were 743 cyclists and 4,735 pedestrians killed that same year.  Over 30,000 people died from falls while over 38,000 died from accidental poisonings.  3,391 died of unintentional drownings.  Over 41,000 people died of suicides.