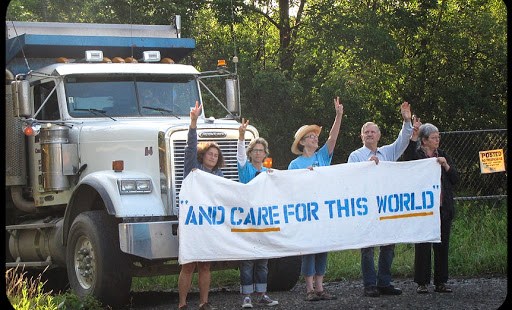 Environment activists in New York have enlisted the help of the Holy Father to help further their cause.

Thirteen protesters arrested while forming a human blockade around a gas storage facility in Seneca Lake, New York, on August 4, were “reading from Pope Francis’ encyclical on the environment, Laudato Si’” according to AlterNet.

The protesters were trying to bring attention to a proposal to store “tens of millions of gallons of liquefied petroleum gas, and up to two billion cubic feet of natural gas, in abandoned subterranean salt caverns thousands of feet below the shores of Seneca Lake” in the Finger Lakes region of New York. The lake provides drinking water to over 100,000 people.

The gas storage facility, operated by Houston-based Crestwood Midstream Partners, has been the target of protests by environmentalists for the last eight months. The number of arrests since the campaign began totals 332.

Activists also carried banners which quoted lines from prayers from the Pope’s Encyclical on the environment, including “Love the Common Good” and “And Care for This World.”

According to AlterNet, “Crestwood is already permitted to store more than one billion cubic feet of natural gas in salt caverns near Watkins Glen, the county seat of Schuyler County where it owns the U.S. Salt plant.” The plan would expand their operations.

The company says it hopes to create new jobs and investment in the region, which has suffered the loss of its once thriving industrial sector.