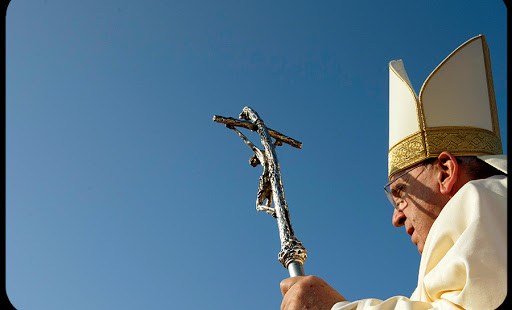 To be celebrated September 1st together with the Orthodox Church

VATICAN CITY — As millions of gallons of toxic decontaminate and sludge from a Colorado gold mine pour into the Animas River following a massive mining spill last week by the federal Environmental Protection Agency, Pope Francis has announced his decision to institute a “World Day of Prayer for the Care of Creation” to be celebrated annually on September 1st.

The purpose of the Day is to offer all Catholics the opportunity “to reaffirm their personal vocation to be stewards of creation, to thank God for the wonderful handiwork which he has entrusted to our care, and to implore his help for the protection of creation as well as his pardon for the sins committed against the world in which we live.”

“As Christians,”  the Pope stated, “we wish to contribute to resolving the ecological crisis which humanity is presently experiencing. In doing so, we must first rediscover in our own rich spiritual patrimony the deepest motivations for our concern for the care of creation.”

“We need always to keep in mind,” he continued, “that, for believers in Jesus Christ, the Word of God who became man for our sake,  ‘the life of the spirit is not dissociated from the body or from nature or from worldly realities, but lived in and with them, in communion with all that surrounds us’ (Laudato Si’, 216).”

“The ecological crisis thus summons us to a profound spiritual conversion: Christians are called to ‘an ecological conversion whereby the effects of their encounter with Jesus Christ become evident in their relationship with the world around them’ (ibid., 217). For ‘living our vocation to be protectors of God’s handiwork is essential to a life of virtue; it is not an optional or a secondary aspect of our Christian experience’ (ibid.),” he said.

September 1st has been chosen to coincide with the same day of prayer already observed by the Orthodox Church.

Pope Francis said his decision came in response to a suggestion made by the Orthodox Ecumenical Patriarch Bartholomew’s representative, Metropolitan Ioannis of Pergamum, who took part in the presentation of the Encyclical Laudato Si’ on care for our common home.

“The celebration of this Day, on the same date as the Orthodox Church,” Pope Francis said, “will be a valuable opportunity to bear witness to our growing communion with our Orthodox brothers and sisters.”

He also expressed his hope that the Day of Prayer will “in some way also involve other Churches and ecclesial Communities, and be celebrated in union with similar initiatives of the World Council of Churches.”

As head of the Pontifical Council for Justice and Peace, Cardinal Turkson has been tasked with working together with the various Episcopal Conferences and national and international organizations involved in environmental issues, to arrange suitable ways of publicizing and celebrating the Day.

As president of the Pontifical Council for the Promotion of Christian Unity, Cardinal Koch has been charged with making the necessary contacts with the Orthodox Church, and  ensuring that the Day of Prayer is coordinated with similar initiatives undertaken by the World Council of Churches.

The Pope concluded by invoking the intercession of the Blessed Virgin Mary, Mother of God, and St. Francis, whose Canticle of the Creatures, he said, “inspires so many men and women of goodwill to live in praise of the Creator and with respect for creation.”