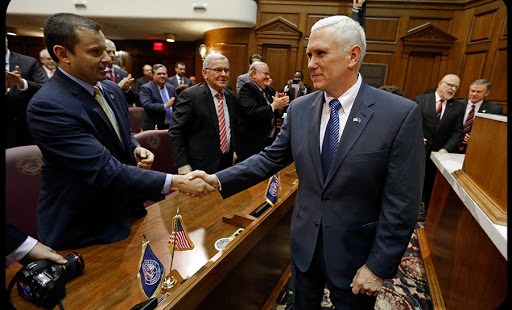 A new Indiana law requires that abortion clinics dispose of fetal remains properly or give the mother a chance to bury her baby.

Gov. Mike Pence Monday held a ceremonial signing of an "aborted fetal remains" bill (SB 329), which establishes rules as to how abortion facilities must dispose of aborted babies and allows the pregnant woman to choose a different method at her own expense (burial or cremation).

According to testimony, the Indianapolis Planned Parenthood facility was disposing of aborted babies down a drain into the sewer system. The legislation was authored by Sen. Liz Brown (R-Fort Wayne).

The bill was enacted in April, well before revelations about Planned Parenthood’s involvement in fetal organ and tissue trafficking.

“This law creates rules for how to appropriately dispose of aborted fetal remains,” Brown said. “Establishing standards brings respect to the woman, abortion staff and the aborted child. These standards require the facility to dispose of the baby’s remains properly, unless the woman chooses to bury her baby. Hoosiers want their government to ensure the bodies of aborted babies are treated with dignity and this law accomplishes that.”

“We’re thankful for Gov. Pence’s commitment to the pro-life cause and for the legislators who boldly passed these bills,” said Mike Fichter, president and CEO of Indiana Right to Life. “The aborted remains bill is especially timely, as Americans pause to consider what becomes of the tiny lives ended in abortion procedures. We believe the aborted remains bill provides dignity to the babies, their mothers and the abortion facility staff."

Both bills passed with bipartisan support.