An Art Lesson: Getting Down to Earth With Jesus and Mary 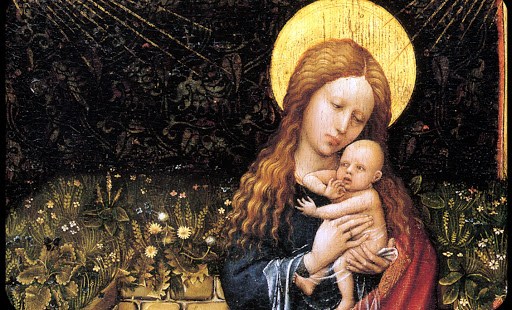 Looking for clues in portraits of the Madonna and Child

When strolling through a church or an art museum, it is quite easy to become bewildered by the profusion of images of the Virgin Mary holding the Baby Jesus. The casual viewer, seeing century after century of different interpretations of the Madonna and Child, could be forgiven for thinking that these images were created entirely at random. Yet this is in fact another example of why paying attention to detail, and knowing your history, is so important in understanding Western culture.

The earliest known example of Mary holding Jesus dates to about 150 A.D.; it is located in the Greek Chapel inside the Catacomb of Priscilla in Rome. Since that time, there have been tens of thousands of different depictions of the Madonna and Child. Because the Bible does not tell us what Jesus or Mary looked like, and we have no contemporary images of either to use as reference points, artists use their imagination in the creation of these pieces.

The majority of earlier paintings, sculptures, or mosaics typically depicted Mother and Son in one of two ways. Either the Virgin Mary was shown seated on a throne, holding the Christ Child in her lap, or she was shown standing and carrying the Infant Jesus in her arms. There are countless examples of these two archetypal images in Early Christian, Byzantine, Romanesque, and Gothic Art, and they are still popular today. The seated image, in particular, was often used as a way of representing not only Christ’s Divinity and Majesty, but also of His Mother’s own special role in salvation history.

Beginning in the 14th century however, and lasting up through the early 16th, an interesting way of depicting Mother and Son became popular. This was a form called “The Madonna of Humility,” which was particularly popularized by the Franciscans. While this sometimes took the form of Mary breastfeeding the Infant Jesus, more critically this type of image showed the Madonna and Child seated, not on a throne, but either directly on the ground or on a cushion on the floor.

This is a detail one can easily overlook. When seeing a myriad of images of the Madonna and Child in a gallery or cathedral, the eyes can blur over, and one painting or statue can seem very much like another. It is an important detail to remember, however, because it goes to the intent of the artist.

Stop and think for a moment about what this type of image conveyed to the viewer at the time it was created. After having become accustomed to seeing the Virgin Mary and Infant Christ as lofty, regal figures in churches and public buildings, seated upon a throne, here was something quite different. This type of image reminded the Medieval viewer of the humanity and humility of the two people being depicted. In representing a Jesus and Mary quite literally come down to earth, showing them actually sitting upon it as we ourselves might, the artists who created these images were expressing that love of humility which was so much a part of St. Francis of Assisi’s spirituality.

Thus this seemingly innocuous detail, which we can so easily overlook, meant a great deal to the people of the time in which these works of art were created. It allowed them – and us – to reflect and mediate on how God humbled Himself to be born as a human baby, with a human Mother to care for Him. It also demonstrates why paying attention, when looking at a work of art, is so important in understanding the reasons why it was created, particularly in an age which has long abandoned not only Christianity, but also the study of Western history and culture.

William Newton
i
s a graduate of the Georgetown University School of Foreign Service, The University of Notre Dame Law School, and Sotheby’s Institute of Art in London. Learn more at wbdnewton.com and follow on Twitter @wbdnewton. This article appeared on Mr. Newton’s Blog of the Courtier and is reprinted here with permission.