“We Are Given Something Extraordinary to Pass On” 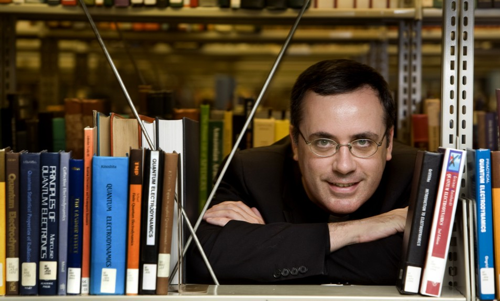 OXFORD — For three years before he became a priest, Father Andrew Pinsent worked as a particle physicist at the CERN laboratory alongside Tim Berners-Lee, founder of the worldwide web.

But he eventually came to the conclusion that people are more interesting than particles and so — after a subsequent and successful business career in Brazil — he entered the priesthood.

Ordained in 2005, he is a priest of the diocese of Arundel and Brighton in England.

Father Pinsent is also one of the leaders of a flourishing conference to help form young Catholics — called Evangelium — that is held annually at the Oratory School in Reading.

Earlier this month, Father Andrew Pinsent sat down with Aleteia to discuss the Evangelium Conference as it enters its 10th year.

He also spoke — as a scientist and a priest — about the Internet’s influence on the human mind; the Catholic origins of many of Western civilization’s greatest achievements; and what he considers the number one issue in the Catholic Church and Catholic theology today: grace, which has the power to take away our “spiritual autism.”

Father Pinsent, could you tell us a little about the Evangelium conference? What is it? Why did you start it?

It’s worth painting a background picture. The problem we have today is that education in the Catholic Church is almost exactly the opposite of what it should be.

When you think about it, this is completely crazy. They expect young people to go out with pre-Communion training into the world, and be fruitful as Catholics.

Well perhaps by some miracle, some of them still go to Mass and some still practice their faith, study their faith and so on. But what we’re doing doesn’t seem very sensible.

And as someone who worked in business myself, I know how busy people are just doing a normal job. I worked for a consultancy firm for 3 years and ran my own business for 4 years, so I know how busy it is. There’s very little extra time and so you have to use that time well. We have one weekend, but we try to pack a lot into that weekend by careful time management and making sure we have good speakers.

There’s something very powerful about someone who really knows his or her faith, and loves the Lord and His Church. If you’ve got a combination of faith, with someone who has good scholarly knowledge in some field, this is actually one of the most powerful witnesses in the world today.

I certainly experienced that to some extent even just starting seminary and hearing priests talk intelligently about the Faith, with reference to philosophy, for the first time in my life. One shouldn’t have to go to seminary to start to get that education; it should be available to every Catholic to have some kind of input.