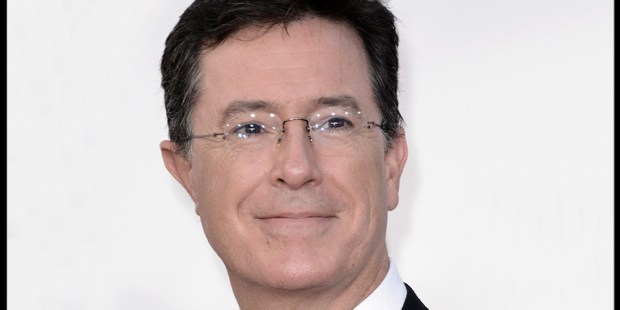 On the eve of the launch of Stephen Colbert’s new TV show, GQ has published a profile of the comedian where he speaks about his Catholic faith, and most poignantly about suffering.

In the course of the interview, writer Joel Lovell, admits that he was unaware that at the age of 10, Colbert lost his father and two older brothers closest in age to him, in a plane crash. The tragedy has, naturally, shaped the comedian’s life. When Lovell asks Colbert how it is that he doesn’t exhibit any of the anger or “open-woundedness” so many other comedians display, that he appears “genuinely grounded and joyful,” this is Colbert’s response:

He sat silently for a while and then smiled. “Yeeeahhhh,” he said. “I’m not angry. I’m not. I’m mystified, I’ll tell you that. But I’m not angry.”

Lovell explores what Colbert means by “mystified,” and Colbert says it’s about being grateful:

“And so that act, that impulse to be grateful, wants an object. That object I call God. Now, that could be many things. I was raised in a Catholic tradition. I’ll start there. That’s my context for my existence, is that I am here to know God, love God, serve God, that we might be happy with each other in this world and with Him in the next—the catechism. That makes a lot of sense to me. I got that from my mom. And my dad. And my siblings.”

Colbert goes on to talk about the example his mother was to him:

“I was left alone a lot after Dad and the boys died…. And it was just me and Mom for a long time,” … “And by her example am I not bitter. By her example. She was not. Broken, yes. Bitter, no.” Maybe, he said, she had to be that for him. He has said this before—that even in those days of unremitting grief, she drew on her faith that the only way to not be swallowed by sorrow, to in fact recognize that our sorrow is inseparable from our joy, is to always understand our suffering, ourselves, in the light of eternity. What is this in the light of eternity? Imagine being a parent so filled with your own pain, and yet still being able to pass that on to your son.

Colbert references a lesson he learned from his improv teacher and mentor who said the greatest thing Colbert could remember in his line of work was “to learn to love the bomb,” which means to learn to love it when you’re failing on stage and when things are falling apart. Colbert tells Lovell:

“Boy, did I have a bomb when I was 10. That was quite an explosion. And I learned to love it. So that’s why. Maybe, I don’t know. That might be why you don’t see me as someone angry and working out my demons onstage. It’s that I love the thing that I most wish had not happened.”

Shocked by that statement — “It’s that I love the thing that I most wish had not happened.” — Lovell asks Colbert to help him understand that better:

… he described a letter from Tolkien in response to a priest who had questioned whether Tolkien’s mythos was sufficiently doctrinaire, since it treated death not as a punishment for the sin of the fall but as a gift. “Tolkien says, in a letter back: ‘What punishments of God are not gifts?’ ” Colbert knocked his knuckles on the table. “ ‘What punishments of God are not gifts?’ ” he said again. His eyes were filled with tears. “So it would be ungrateful not to take everything with gratitude. It doesn’t mean you want it. I can hold both of those ideas in my head.”

He was 35, he said, before he could really feel the truth of that. He was walking down the street, and it “stopped me dead. I went, ‘Oh, I’m grateful. Oh, I feel terrible.’ I felt so guilty to be grateful. But I knew it was true.

“It’s not the same thing as wanting it to have happened,” he said. “But you can’t change everything about the world. You certainly can’t change things that have already happened.”

Lovell said he still carries around, on a slip of paper, the next thing Cobert said about it being “our choice whether to hate something in our lives or to love every moment of them, even the parts that bring us pain”:

“At every moment, we are volunteers.”