Serious Argument: The Right to Marry a Robot 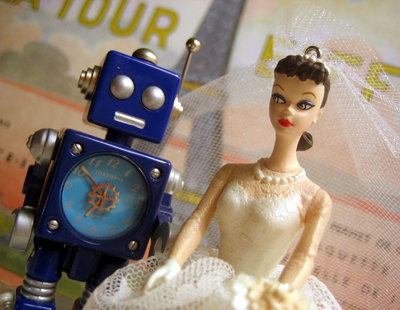 “Love-bots” may not be sci-fi for much longer.

Based on the recent U.S. Supreme Court decision legalizing gay marriage, he writes,

Robot-human marriages might be next on the list. Probably not soon, admittedly, but it nevertheless will be an inevitable part of our future. Indeed, some critics of same-sex marriage, including some conservative Christian opponents of gay marriage, have argued that the court’s recognition of same-sex marriage would inevitably lead to robotic-human marriages. There has recently been a burst of cogent accounts of human-robot sex and love in popular culture: Her and Ex Machina, the AMC drama series Humans, and the novel Love in the Age of Mechanical Reproduction. These fictional accounts of human-robot romantic relationships follow David Levy’s compelling, even if reluctant, argument for the inevitability of human-robot love and sex in his 2007 work Love and Sex With Robots. If you don’t think human-robot sex and love will be a growing reality of the future, read Levy’s book, and you will be convinced.

Or just look at the marketplace. Sex “dolls” have become more and more realistic in appearance and touch, and one company recently announced that it was developing a sexbot with artificial intelligence that can talk back and express emotions. As Levy points out, the first to explore and benefit from robot-human sexual relationships may be individuals with physical or psychological impairments that limit their ability to have sex with other people.

Robot-human marriage is not about robot rights; it is about the right of a human to choose to marry a robot.

So this is an argument for the right to marry something that is not human and not a self. That was bound to happen, of course, as the concept of marriage degenerates from a covenant down to a status marker. Forcing others to recognize one’s machine as a spouse would be a social triumph, of sorts.

There are, of course, those who think we can teach machines to understand us, but the problem is, one can’t “teach” a machine to have a self or care.

And others, more ambitious still, think that AI will make religion obsolete:

… the only way for there to be a good future is if we save ourselves. No gods will save us because there are no gods—unless we become gods.

We’ve heard all that stuff before and it has always ended in catastrophe.

Here’s a thought: Why would one not want a robotic dog or cat? Speaking as a cat person, I would say that there would be no point in it; an actual cat exists independently of my wishes, and his willingness to allow me to serve him ( ;) ) is an expression of the world outside myself. I didn’t program him, and he doesn’t exist to be just whatever I need. Keeps one sane.

If AI were ever to reach the point of marriage to robots, people would essentially be marrying themselves. But perhaps that is what many now want.

Will robots really take over? That depends. It depends on what people can do that machines can’t do.

Would you marry an intelligent robot or just stay single? Such scenarios depend on the assumption that a machine can be conscious.

People seem to be turning against the i[can’t]Carebots—robot caregivers for the elderly. Modern medicine has given us the four generation family, good or bad, where grandfather is alive at the same time as his great-grandchildren.

Robotic caregivers are a bad idea (but not just for the obvious reasons) If we look at it from an economic perspective, the pension money a senior spends on assisted living is not wasted. It is recycled back into the economy as someone else’s salary.

Denyse O’Leary is a Canadian journalist, author, and blogger.  This article first appeared at MercatorNet.  It is reprinted here with kind permission.