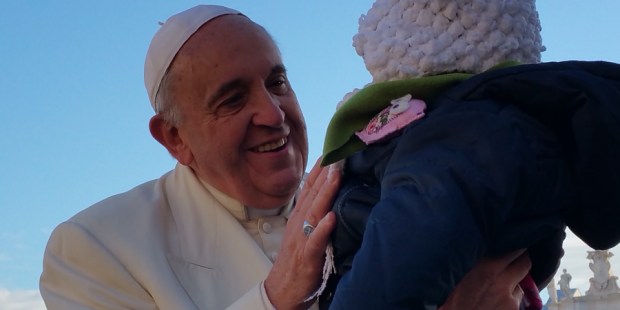 Pontiff will make many stops in the States, but tickets are limited

The City of Brotherly Love may be the best place for anyone hoping to have a chance of seeing Pope Francis in person when he visits America next month.

Many of the events on the Pope’s schedule will be limited to particular groups, such as religious or national and world leaders, or require tickets. But Francis will be at two large public events in Philadelphia on Saturday and Sunday, Sept. 26 and 27. Both will be held on the city’s Benjamin Franklin Parkway, and willnot require tickets.

The Pope will attend the closing ceremonies of the World Meeting of Families Saturday night and celebrate Mass late Sunday afternoon. Organizers recommend taking mass transit or a charter bus—and even that could mean miles of walking, according to the Associated Press.

Earlier in the week, in Washington, DC, the Pope’s address to Congress on Thursday, Sept. 24, will be carried live on jumbotrons outside. There will be a small ticketed area with seating outside the West Front of the Capitol, but tickets will not be required for people willing to stand on the National Mall. There is also a chance the Pontiff will make an appearance outside the capitol.

After DC, the Pope heads up to New York, and the faithful will be able to line up on Fifth Avenue for a brief open-air motorcade that evening. Cardinal Timothy Dolan explained recently that the Pope Francis helicopter from JFK airport to Manhattan around 5pm, and then approach St. Patrick’s Cathedral in the Popemobile. “So crowds will be able to obtain tickets to see him along the route,” the cardinal said.

The Pope will stay that night at the residence of the Vatican ambassador to the United Nations, on East 72nd Street. When Pope Benedict stayed there in 2008, throngs of people kept vigil outside, and the Pope came out briefly to greet a few. Francis might very well do likewise.

Cardinal Dolan said there’s a chance the Pope will take another spin in the Popemobile on his second day in the Big Apple, when he makes his way from Harlem, where he will meet with recently immigrants, to Madison Square Garden, where he will celebrate an evening Mass. “We will publicize that route so that as many as possible can see him,” the cardinal said.

Here is the official schedule for Pope Francis’ Apostolic Journey to the United States as released by the Vatican on June 30, 2015.  All times listed are Eastern Daylight Time.