Philippine Bishop Says Divorce Law is “The Devil at Work” 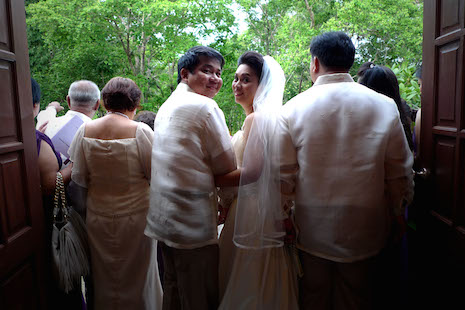 Asian country is sole nation without legal divorce, but maybe not for long

The Philippines bishops have labeled a proposed divorce law as “dangerous” and “a prelude to total divorce,” which Church leaders in the country oppose.

The House of Representatives approved on a third and final reading the proposed law, which would allow Filipinos to remarry after being granted a divorce abroad.

The bill, which seeks to amend the Family Code of the Philippines, proposes to recognize a divorce obtained by a foreign spouse in another country without the need to seek judicial recognition. A similar bill awaits Senate approval before President Benigno Aquino can sign it into law.

“The bill will only require the Filipino spouse to submit a duly authenticated copy of the decree of absolute divorce,” said Rep. Rufus Rodriguez, one of the authors of the bill.

But Archbishop Ramon Arguelles of Lipa said the bill “is prelude to total divorce.”

“Everyone should now understand that the deception is not over. The devil is at work. We are right at the center,” Archbishop Arguelles said, calling the proposed law “evil.”

“That’s why I fight these because they are anti-God and immoral,” he said. “Those who pass this law will face the judgment of God,” the prelate added.

Bishop Honesto Ongtioco of Cubao said Church teaching on marriage “does not change even if some people would advocate change.”

Aside from recognizing the capacity of the Filipino spouse to remarry, the proposed statute also simplifies the process of recognition of a foreign judgment of divorce obtained by a foreign spouse.

The Philippine bishops’ conference issued a statement in March opposing the legalization of divorce in the country, saying it will only make a “mockery” of the sanctity of marriage.

A survey released by pollster Social Weather Stations during the first quarter of 2015 revealed that at least 60 percent of Filipinos want divorce to be legalized especially for “irreconcilably separated” couples.

Women’s party Gabriela last year filed a proposed measure, House Bill 4408 or “An Act Introducing Divorce in the Philippines,” that seeks to address the problem of “irreconcilable marriages.”

Under the proposed law, divorce will be granted only for a petitioner who has been separated from his or her spouse for at least five years “and reconciliation is highly improbable.”

A petitioner who has been legally separated from his or her spouse for at least two years “and reconciliation is improbable” can also be granted divorce, according to the proposed law.

The Philippines is the only country, aside from the Vatican, that does not allow divorce.

Divorce was legal in the Philippines and widely practiced especially among tribal communities until 1950 when the country’s New Civil Code prohibited divorce.

The law, however, allows legal separation—spouses are considered still married to each other and cannot remarry—and the annulment of marriage.

Data from the Office of the Solicitor General show that the number of annulment cases in the Philippines increased by 40 percent from 4,520 cases in 2001 to 8,282 in 2010.

Out of the 8,000 to 10,000 petitions for annulment filed before the Solicitor General, more than 90 percent have been granted by the courts.

This article, by Joe Torres, appeared originally at UCANews.com and is used with permission.