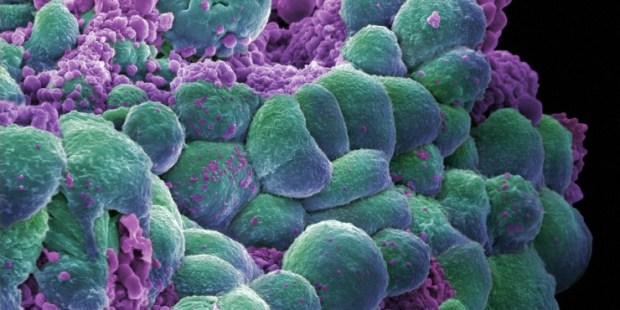 New research published this week shows promise that a manipulation of cells can reverse cancer in humans, the BBC and the Telegraph reported.

Lab-based work at the Mayo Clinic suggests there is a biological step that can restore normality and stop cells replicating out of control. In essence, a treatment would restore the function which prevents cells from multiplying excessively and forming dangerous growths. Mayo Clinic researchers are hopeful that the new mechanism they have found could apply to all types of cancer and would avoid the need for chemotherapy or surgery.

The Telegraph explained the process, which was published in the journal Nature Cell Biology:

Cells need to divide constantly to replace themselves. But in cancer the cells do not stop dividing leading to huge cell reproduction and tumour growth.

The scientists discovered that the glue which holds cells together is regulated by biological microprocessors called microRNAs. When everything is working normally the microRNAs instruct the cells to stop dividing when they have replicated sufficiently. They do this by triggering production of a protein called PLEKHA7 which breaks the cell bonds. But in cancer that process does not work.

Scientists discovered they could switch on cancer in cells by removing the microRNAs from cells and preventing them from producing the protein.

And, crucially they found that they could reverse the process switching the brakes back on and stopping cancer. MicroRNAs are small molecules which can be delivered directly to cells or tumours so an injection to increase levels could switch off disease.

Although the early tests in a dish look promising, it is unclear whether it will help treat people with cancer, said the BBC:

Henry Scowcroft, Cancer Research UK’s senior science information manager, said: “This important study solves a long-standing biological mystery, but we mustn’t get ahead of ourselves.

“There’s a long way to go before we know whether these findings, in cells grown in a laboratory, will help treat people with cancer. But it’s a significant step forward in understanding how certain cells in our body know when to grow, and when to stop. Understanding these key concepts is crucial to help continue the encouraging progress against cancer we’ve seen in recent years.”